“Read a Damn Book – 018: We Must Remain Focused When Waiting for Thunder” 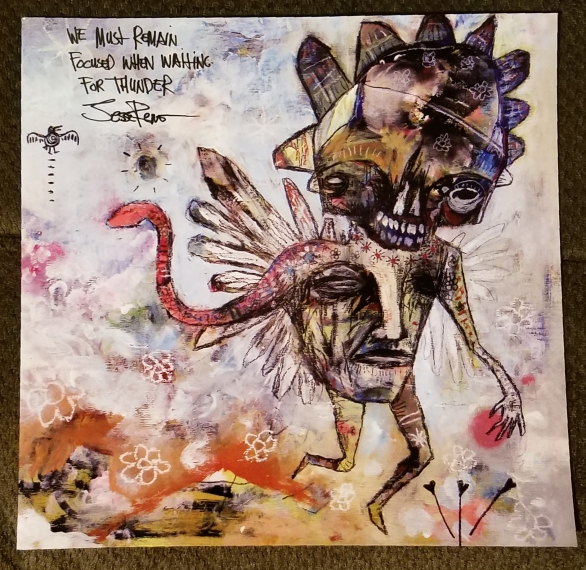 Jesse Reno – We Must Remain Focused When Waiting for Thunder (2008)

I first discovered the artwork of Jesse Reno (who, last I heard, lives in Portland, Oregon) at The Lunar Boy Gallery in Astoria, Oregon, which was my favorite gallery, EVER, and therefore had to close. Anyway, my wife and I drug the kids into this cool gallery near the coast, coincidentally during an exhibition of Reno’s paintings. We were immediately struck by how expressive and creepy these paintings were, and were very pleased to find a book of Reno’s work right there in the gallery, so we scooped it up that instant.

The images in this book have a Native American aesthetic, but haunted, corrupted, and dipped in extract of Basquiat, with a side order of Cy Twombly sauce for spice. Most of the paintings have a central image that is part animal, part human, part ghost, and/or part plant, with extra limbs, multiple faces, arms that end in snakes, horns, or some other chimerical morphology. Reno uses acrylics, oil pastels, pencil, and collage bits, usually on a wood support, to create a multi-layered, masterfully collaged (almost quilted, at times) look, and the creatures in the paintings ALSO have this same multi-layered feel: part Native American / part modern hipster / part Nature / part spirit world.

In addition to the central creatures, there are also many repeated symbols peppered throughout the works: the bird, the sun (sometimes fractured in two), flowers, snakes, squiggles, stars, and written words that both complicate and compliment the images. The titles for the paintings (sometimes scrawled into the images themselves) add to the feeling of each piece, creating a magical incantation, and a hypnotic, haunted feel. That’s probably the best word for all of this work, even the images that are smiling or swimming in light colors: haunted.

I’m willing to admit that I’ve stolen a lot from Reno in my own artwork (although I’d never pretend to having the depth or complexity of what he accomplishes.) If you are a fan of modern artists like Jean Michel Basquiat, Cy Twombly, or Robert Rauschenberg, or if you like your Native American art with a touch of the grotesque and bizarre, then a book by Jesse Reno might just be the thing for you!

Compulsive creator of the bizarre and absurd. (Artist, writer, poet, provocateur...)
View all posts by richardfyates →
This entry was posted in writing and tagged art, books, paintings, reading, reviews, shamanism. Bookmark the permalink.