Posted on October 1, 2017 by richardfyates 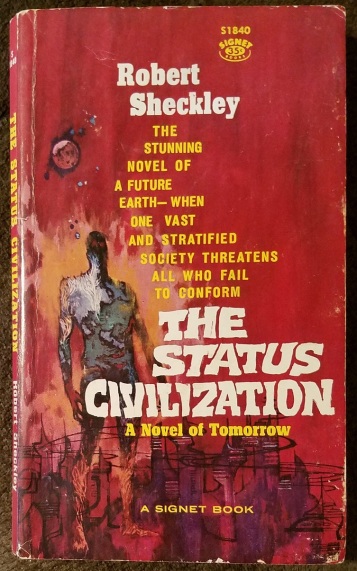 As I mentioned in my review of The Robot Who Looked Like Me, Robert Sheckley is one of my favorite authors. He was particularly adept at presenting vicious social criticism under a veneer of humor and absurdism, which made his critiques more tolerable than they would have been if he’d just been cussing from a soapbox on a street corner. The Status Civilization, a particularly poignant work, is a serious warning disguised as a science fiction novel. In these pages, Sheckley skewers class stratification, religion, morality, and standardized education by turning the traditional meanings of these concepts on their heads. It’s dark and funny and suspenseful, and once the dust settles, it actually has a lot to tell us about the construction of meaning in our own society (even though it was published over fifty years ago!)

Our “hero,” Will Barrent, awakes on board a transport ship heading for a prison planet. He is told that he is a murderer, but because all of the prisoners on board the ship have had their memories wiped, he doesn’t remember committing the crime. The planet he’s being transported to, Omega, is rigidly stratified along class lines, and the quickest and most sure way to climb the ladder in Omegan society is by killing other citizens. Though Barrent moves rapidly up in social rank, mostly through a series of strange incidents that are always just out of his control, his personal disposition puts him at odds with the prevailing ideologies of Omegan law.

For one thing, he keeps having disturbing urges NOT to kill, except in self-defense. He is also visited by a local priest who chastises him for not coming to Black Mass often enough. (The worship of Evil is the state mandated religion on Omega.) And, in complete defiance of the law, Barrent refuses to become addicted to any drugs! According to the judge who sentences Barrent for not being an addict, drugs are an important part of their society. The judge says, “I will tell you that an addicted populace is a loyal populace; that drugs are a major source of tax revenue; that drugs exemplify our entire way of life. Furthermore, I say to you that the nonaddicted minorities have invariably proven hostile to native Omegan institutions” (p. 46). [I would argue (whether we’re talking about alcohol, pot, opioids, or any of the thousands of prescription mood modifiers out there) that this is just as true today!] Non-compliance with the required addiction policy, in conjunction with Barrent’s general lack of enthusiasm for Omegan social conduct, eventually marks him for death by the state.

Through Sheckley’s humorous reversals, (evil is good, murder brings social advancement, addiction is the essence of happiness,) each of the social morays that most people hold sacred are twisted, tested, and usually found lacking. The pace of the story is also lightning fast, with a real PULP ADVENTURE feel. (The story was originally serialized in Amazing Science Fiction Stories magazine.) It’s got it all: humor, suspense, adventure, and some seriously intense social commentary. Few authors can write an exciting adventure story that ALSO makes you think—but that’s exactly what Sheckley does here.

Barrent’s journey of discovery on Omega, from amnesiac prisoner to privileged citizen to hunted quarry, is exceptionally entertaining and well worth the read. I suppose SOME sensitive types might find parts of this book offensive, particularly the religious critiques, but the story doesn’t have much in the way of gore or sexual content or even dirty language. Those looking for a fast-paced sci-fi adventure will find a lot to enjoy here, but for those who like something a bit deeper, this book really shines. 1984 may be the classic work dealing with conformity and social programming, but THIS book is not only funnier, but may actually present a more haunting message about societal control. It’s a book that NEEDS to be read and understood—today, RIGHT NOW—by as many people as possible. Sheckley’s predictions are moving closer and closer to coming true, and maybe, if we can understand HOW social programming works, we’ll be more capable of resisting it when we see it’s actually happening! Read this book…