Posted on November 5, 2017 by richardfyates

Shane Grove*, molder of young minds (and a teammate on my Thursday night bowling league), found a book for me that he knew, thanks to my love for the weird and “unexplained,” was going to be right up my alley! He wasn’t wrong!!!

[* Mr. Grove is also the only person, so far, to write a guest review for RADB. He provided a second opinion on Hunter S. Thompson’s Fear and Loathing in Las Vegas. After you read this review, go check that one out!!!] 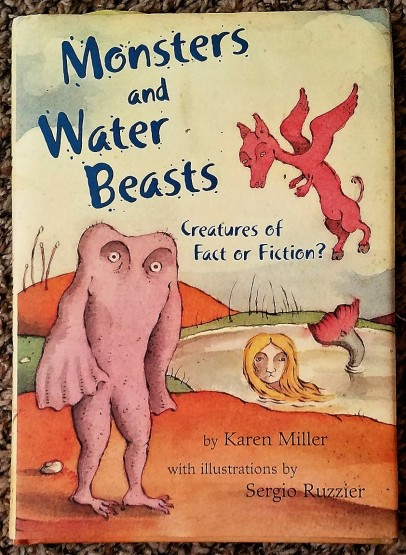 Monsters and Water Beasts is a middle reader book (intended for kids between the ages of 8 and 12) in which Miller writes about a small selection of well known “cryptids,” and Ruzzier provides some fantastic color artwork. Miller starts each chapter by retelling a personal encounter by an eyewitness to some strange creature, and then Miller follows these stories with possible explanations for whatever the witnesses saw. Most of these explanations tend to run towards the “believer” side of the spectrum, and only a cursory mention (and usually subsequent dismissal) of the skeptical position makes it into each chapter. Miller covers nine different monsters in all, touching on the biggies: Bigfoot, Mothman, The Jersey Devil, Champ, but she chooses to avoid a couple of “classic” critters. (No Nessie? No Chupacabra?) I suppose sticking with just a few creatures gave her the chance to look in greater detail at her chosen beasts and still keep the book relatively short, which is important for a middle reader book. A 700-page tome (which you’d need to cover EVERY cryptid) would be too imposing for youngsters.

As I mentioned briefly above, Miller tends to lean pretty heavy on the believer angle, using phrases like “experts” and “some scientists” when discussing evidence that supports the various beasts, this type of language will lend credibility to the pro-cryptid argument, and then she usually discredits the skeptical arguments for cryptid sightings after only briefly mentioning them, if they are mentioned at all. To be fair, a middle reader book that said in no uncertain terms, “Monsters aren’t real! And Santa is really just your parents…” probably wouldn’t be very popular with the target audience. However, I do wish that Miller had provided a more balanced presentation of these investigations, as Joel Levy did in his book Unsolved Mysteries. Levy told the folklore account, mentioned what believers thought had happened, covered the skeptical and mainstream beliefs, then ended with the “fringe” theories, making certain that the reader knew which theories weren’t accepted by the majority of the researchers or the scientific community.

A quick look at Miller’s “Selected Resources” reveals a number of prominent cryptozoologists and chroniclers of the weird, including Loren Coleman, Bernard Heuvelmans, and (perhaps the most famous name in the cryptid pantheon) John Keel! If these are Miller’s sources, it’s no wonder that the book leans towards the believer end. I’m not seeing anything here from the skeptical community. Where is Joe Nickell’s account or Ben Radford’s or Daniel Loxton and Donald Prothero’s work from Skeptical Inquirer or Skeptic Magazine? It’s entirely possible that Miller has never heard of any of these authors, but Joe Nickell has been writing skeptically on weird topics like these for decades, and he has appeared on a bunch of talk shows and programs about strange phenomena. Granted, skepticism isn’t as fun when you’re a kid, but I still think it’s important to at LEAST let kids know that not EVERYONE is a believer. At one point, Miller even calls the skeptics “cynics,” which is not always the case. (Some skeptics are pretty cynical, and some cynics aren’t skeptical at all!) Moreover, I think Miller takes the “believer” perspective WAY TOO FAR, even leaving HOOP SNAKES open for possible discovery by zoologists. Maybe they’ll find a giant blue ox, too!

On the positive side, the book is pretty fun, and Miller’s choices for personal encounter stories were engaging. My favorite element of this book, though, is Sergio Ruzzier’s art. He draws a few images for each chapter (as well as the cover), and I’m very entertained by his renditions. His Mothman is a literal interpretation based on very early sightings, where the witnesses claimed the creature had no neck, huge wings, and giant saucer-like eyes. What he draws (you can see it in the cover image) looks more like a blemmy from medieval travel stories than the highly stylized, Frank Frazetta painting that most of us think of today. Other excellent interpretations are The Jersey Devil (p. 40) and his rather creepy “cadborosaurus” (p. 80).

Overall, this isn’t too bad of a book, and I’m betting that young persons who are interested in monsters will find a lot to enjoy here. Miller follows the tried and true method of introducing each creature with a bang, and Ruzzier’s illustrations are very enjoyable. My suggestion for parents hoping to balance the believer opinion with the skeptical would be to read the book with your kids (or before or after they read it) and then discuss the monsters with them. For a very enjoyable (often PUN-heavy) science based show about monsters, I recommend the podcast, MONSTER TALK, with hosts Blake Smith and Dr. Karen Stollznow. They also start each show with the folklore stories, but then bring on scientists (like Dr. Todd Disotell, Dr. Kenny Feder, Dr. Steven Novella,), psychologists (Dr. Chris French, Dr. Richard Wiseman), and skeptics (Dr. Joe Nickell, James Randy, Daniel Loxton), and a number of other specialists in art, history, theology, journalism, etc., to discuss the evidence, historical context, and cultural factors behind the monsters, ghosts, and other strange phenomena they cover. It’s one of my favorite programs, and they have done episodes on several of the creatures that Miller and Ruzzier address in this book.

So, to conclude, the book is pretty good. Its tone is a bit credulous for my taste, but the artwork is great, and there is always the possibility that kids will get interested in the monsters and then eventually find their way to science because of the stories! I know I did! I grew up on In Search Of and Readers Digest’s Mysteries of the Unexplained type books, but here I am today, an advocate for scientific skepticism! This book is fun for what it is, and like I said, it’s worth the price of admission for the artwork alone. (Thanks again to Shane Grove for bringing this book to my attention!)