Posted on December 23, 2017 by richardfyates

Back in 1984, I bought my first X-Men comic for 60 cents from Olympic Drug in Longview, WA, USA. (It was Uncanny X-Men #187—I don’t have the book anymore, but found an image of it online after a quick search.) The comic had a weird monster on the cover, a “Dire Wraith,” which I learned was one of an entire race of malevolent, outer space, shape shifting creatures who were attacking some guy named Forge at his high-tech home, and a cool lady with a mohawk was trying to fend the monsters off. I also remember that Rom, the Space Knight, was somehow, vaguely, involved. (Rom was a toy that was popular back in the early ’80s.) I was fascinated by the comic, and I scoured the city (hitting places like Fred Meyer, Furness Drugstore, and Ron’s Emporium) looking for more adventures from the X-team. That one comic was the start of a decade long obsession with X-Men, that really only stopped when I had to choose between buying comics and paying for diapers. 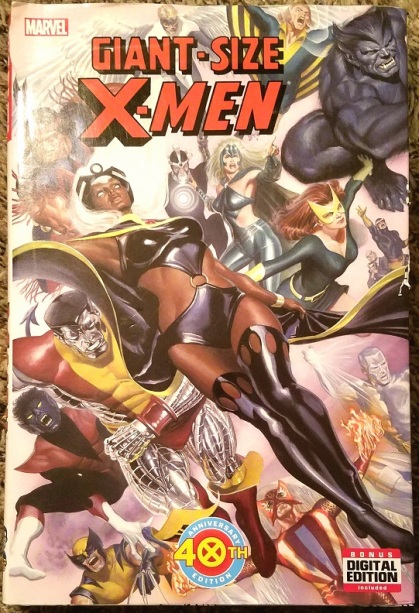 What Beazley did with this book is create a tribute to the “NEW” X-Men, the second generation of X-heroes who revitalized the series and brought it back from the dead. Len Wein and Dave Cockrum released Giant-Size X-Men #1 in 1975, which brought the series back to the public’s attention. The original X-Men series, which Stan Lee and Jack Kirby started publishing in 1963, had lost its fire, and the book was effectively cancelled in 1970. The comic continued to be published, though, reprinting old stories but without any new content, until the series was given a jump-start in 1975, thanks to Cockrum and Wein (although Wein, the writer AND editor for the book, would rather quickly give up writing duties, being replaced by his assistant, Chris Claremont.) This book gave us a passel of new characters, some exciting dramatic tension, and a gigantic, living island for the heroes to fight against! (It sounds weird—and it was.)

Collected in the book are Giant-Size X-Men #1, 3, and 4; a couple of X-Men Origins stories; a more modern retelling of G-S X-M #1 called X-Men: Deadly Genesis; a couple of issues from the What If? series; a fanzine from 1975; some concept art; and a bunch more stuff. It’s a beefy book, which explores the characters from a dozen different angles, and actually contains some genuinely interesting historical material. The fanzine is fun, the character sketches and costume development discussions are insightful, and learning about how the careers of the creators affected the development of the comic itself was pretty cool.

So what about the stories themselves? The entire issue of Giant-Size X-Men #1 is reprinted in this book, and it starts with Professor X hopping around the world collecting various mutants to help him with a special project that he says is of vital importance to the entire world. He finds a few characters who would become intrinsic to the series in later issues: Wolverine, Colossus, Nightcrawler, Storm; and a few who didn’t last too long. These little vignettes, mini-origin stories for several of the characters, are somewhat interesting, although the spoken dialog seems offensively stereotypical to my modern sensibilities. The Irish character, Banshee, has to say “laddy” and things like, “’tis good t’ be seein’ ye,” so we know he’s Irish. (Ack.) And each ethnic stereotype falls nastily into their cultural roles…right “comrads!” But it was 1975, and the creators were TRYING, I believe, to be inclusive.

The problem with G-S X-M #1, however, it that it’s rather nonsensical. I know comics in the 60s and 70s were mostly targeted at kids, and I know that garish costumes were in fashion, and I know that the entire PREMISE of humans born with weird super-powers is far-fetched to the extreme, but this initial story, considering it ushered in the age of the BRAND NEW X-Men…well… I’m sort of surprised it took hold. I don’t want to spoil the plot for people who haven’t read it, so I’m not going into the details, but let’s just say this as a general summary: there are too many characters involved who don’t really need to be there—they don’t contribute anything specific to the story; there are some weird branches to the plot that seem completely superfluous (various sub-teams are dropped onto this big island in various locations, for no real reason, and then—after they each overcome some weird little challenge, they all randomly meet back up at the same location); and the final battle with the main foe in the story ends with a WHOPPER, as far as physics goes. But for an introductory story, I suppose it served its purpose: it gave the world some new X-Men to sink their teeth into. (And, to be fair, in Chris Claremont’s hands, the stories did get A LOT better later on!)

The rest of the comics collected in this book are either recursive retellings of Giant-Size X-Men #1, or they are addendums, adding new information to that original story and changing the meanings of the events. The Deadly Genesis storyline, which was a six issue mini-series written by Ed Brubaker, is quite good, although it demolishes Professor X as a person, showing him to be a callous, almost egomaniacal villain, who is willing to risk the lives of a bunch of people just to further his own agenda. My favorite stories in the book were actually the What If? tales, but I’ve always like that “alternate reality” type of thing, personally.

Overall, this is a fascinating collection of material, which shows how comics have evolved over the last several decades. The supplemental materials are very cool, and the VARIETY of artifacts collected here is seriously impressive, demonstrating how much thought, effort, and work goes into a (seemingly) simple comic. For someone just looking for a good story to read, this might not be the collection for you. The recursive nature of this collection, in which the same story is basically told and retold and reimagined and retold again, could make it a bit tedious for the average reader (unless that reader happens to be a Samuel Beckett fan, who loves elliptical and recursive texts…) But for someone who already loves the X-Men and who is curious to see how they RE-SPRANG into being, then I recommend grabbing a copy of this book right away. (Really though, if you’ve NEVER read an X-Men book, either start with the Marvel Masterworks collections that go back to Lee and Kirby, or grab a Chris Claremont penned graphic novel. That Claremont kid—he can tell a story!)

Compulsive creator of the bizarre and absurd. (Artist, writer, poet, provocateur...)
View all posts by richardfyates →
This entry was posted in writing and tagged books, comics, reading, reviews, super heroes. Bookmark the permalink.