I’ve been reading a lot of American comics lately, superhero tales and horror stories, primarily, but it’s important to remember that Americans aren’t the only people who do comics—and I thought I needed a pallet cleanser from all the super-heroics, so I decided to look to Japan. I wasn’t sure what type of manga I was in the mood for: maybe something funny, or full of romance, or possibly something with some martial arts in it!!! Or, what if I could get all of those genres in one, handy little package… 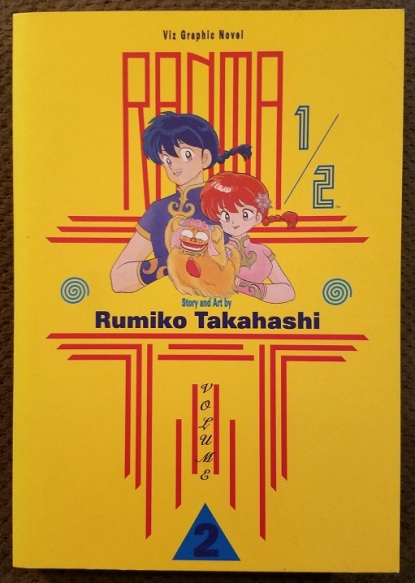 It’s been too long since I read some classic manga, so I grabbed the second volume of Rumiko Takahashi’s classic comedy series, Ranma ½. I previously reviewed the first volume back in October, but for those who missed that review, here’s a brief overview of the Ranma books: Ranma Saotome and his father, Genma, who are expert martial artists, go to a haunted training ground in China, where they are accidentally cursed by two spirits who drowned there. Now, whenever Ranma is splashed with cold water, he becomes a girl, and when his father is splashed with cold water, he becomes a panda! The transgender nature of Ranma’s condition leads to some great, Three’s Company-style comedy, and the whole series is played, primarily, for laughs.

However!!! Takahashi is such an adept storyteller that what could come across as ludicrous or even offensive farce, somehow manages to have endearing characters and some moments of real sweetness. We learn early in the first volume of Ranma’s adventures that his father has promised him in marriage to the daughter of the father’s best friend, Mr. Tendo, who runs a martial arts school. Mr. Tendo’s daughter, Akane, is also a skilled fighter, but the idea of the marriage is not particularly appreciated by either Akane OR Ranma, who spend most of the story fending off the romantic advances of a host of strange characters, as well as fighting with each other.

In this volume, we see the return of Ryoga from Volume 1, another victim of the haunted training ground in China, who turns into a piglet when he gets wet, and we also meet a deranged female character, Kodachi, who of course falls instantly in love with Ranma, and thus poisons him with knockout gas so that she can have her way with him. (He is saved by Akane before anything naughty can happen.) Kodachi is the sister of Kuno, who was the main villain (besides Ryoga) of the first volume, and one of the prime assailants trying to win Akane’s affections. The tangled love vectors in this series are almost as much fun as the weird fight scenes that are peppered throughout. An extended battle occurs in this volume between Kodachi and Ranma (in female form), as part of an exhibition of “martial gymnastics” at the school. It’s got all the drama of professional wrestling and all the absurdist humor of a Monty Python skit rolled into one, long, bizarre fight scene!

There are tons of great gags in this book (I laughed out loud a couple of times while reading it), and Takahashi’s facial expressions are fantastically entertaining, as always. There are some (very cartoony) scenes of nakedness, but nothing raunchy, and the violence is definitely on the silly side (as opposed to Battle Royale or Blade of the Immortal, which are over the top with the gore.) I’m going to say this book should be safe for middle school and up—or high school and up if you’re a bit uptight about cartoon nudity. Volume 2 is a very quick read, and chock full of absurd, romantic comedy. I really do recommend giving the Ranma ½ books a try if you want something fun and a little bit silly to read—although I should say, if you’ve never read this series before, you should definitely start with Volume 1. If you enjoy that book, then don’t be afraid to move on to Volume 2, which is equally entertaining!