Posted on February 24, 2018 by richardfyates

Until recently, I’d heard a bit about a television show called iZombie, but I wasn’t particularly interested in watching it. I thought, “I’ve seen Night of the Living Dead, Dawn of the Dead, Children Shouldn’t Play with Dead Things, Shawn of the Dead, Evil Dead, Return of the Living Dead… What else could anyone possible do with a zombie that could make that tired old genre interesting again?” Then my older daughter, Frankie, and I went to the I Like Comic Con in Vancouver, WA, a few weeks ago, and she was particularly excited to meet this guy, Chris Roberson, who did the iZombie comic book. He was very pleasant, signed Frankie’s book, and I asked him, when I saw the iZombie display, who the influences were on his artwork, because I was really impressed with the art on the display. He said he wasn’t the artist for the series, he was the writer… (He was very polite about it, even though I was completely ignorant of who he was.) I looked at the artwork again, and I asked, “Is the artist Mike Allred?” And he said it was. BAM! That’s all it took. I was in. If Allred is involved, I’ll always be happy to read whatever it is. 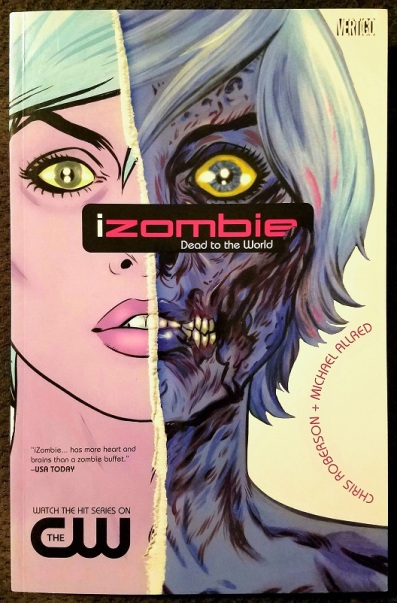 So most of you probably know a lot more about this series than I do, what with the show being on Netflix and all popular and such, but for any people out there who DON’T know what this story is about, here’s a quick and dirty overview. A woman named Gwen is a gravedigger by day, and a zombie by night. Unlike your traditional, shambling corpses with no intellect and an unquenchable lust for human flesh, Gwen is intelligent and physically coordinated, she even paints, which is fairly rare in a zombie, and she can continue to maintain that level of intelligence and control as long as she eats a human brain once a month. Hence the career as a gravedigger—she has quick access to fairly fresh brains whenever she needs them.

A slight wrinkle pops up, however, when the reader discovers that eating a person’s brain floods Gwen with the memories of the person she’s dining on, and in this first collection in the series, the person whose memories she absorbs was murdered, and Gwen decides that she needs to find the killer and bring them to justice. To help her in her quest, Gwen has two friends, one is the ghost of a young woman killed back in the 1960s, Ellie, and the other is a were-terrier named Scott, who Gwen calls Spot, because she’s a bit insensitive. Then, of course, there are also the inevitable monster hunters in the story, who for millennia have made sure that the dead, whether zombies or vampires or ghosts or whatever else, stay dead—or go back to being dead—and this group of monster hunters have found their way to Eugene, Oregon (where the story is set), and started bagging creatures of the night. In another twist of fate, one of the monster hunters develops a crush on Gwen, who isn’t sure how to act around him, knowing that if he finds out she’s a zombie, she’ll end up on his hit list.

The story is entertaining, the characters are developed well as the tale unfolds, and Allred’s art is excellent, as always. There’s not much more that you can ask for in a graphic series. This book collects the first five issues of the monthly comic, as well as a short from The House of Mystery Halloween Annual #1, which serves as a sort of introduction to the series. If it says anything, I’m going to ask Frankie if I can borrow the second collection as soon as I get this one back to her! (I’m still not sure if I want to watch the television show, but I will happily read more of the books!)

For sensitive types, the story is probably going to be too gruesome for comfort. It IS a zombie story, and although Gwen isn’t a typical Romero ghoul, she does dig up bodies and eat brains. I can see, on the other end of the spectrum, how some might find the story a bit silly, and there is a sarcastic, post-modern tone to the book, as opposed to that darker, gothic, more serious take on life-after-death that you get in things like Interview with a Vampire. But if you have a taste for tongue in cheek horror, along the lines of American Werewolf in London or Evil Dead, where there’s some laughs mixed in with the blood and terror, then iZombie – Dead to the World, will definitely be something to look for—especially if you’re tired of the old, hungry corpse motif and looking for something a bit…fresher!

Compulsive creator of the bizarre and absurd. (Artist, writer, poet, provocateur...)
View all posts by richardfyates →
This entry was posted in writing and tagged books, comics, horror, reading, reviews. Bookmark the permalink.