When I was a youngster (somewhere around 11 or 12), I used to go to this little comic shop in Longview, Washington, called Vista Comics. At one point, I spotted a cool looking book on the wall with a two-color cover, called Teenage Mutant Ninja Turtles. I asked if I could buy that book, and the lady behind the counter said no. Apparently, some kid or other had bought the book from them, and the parents came back angry because they’d sold this violent book to their child, so the proprietors of Vista decided they wouldn’t sell it to kids, anymore—but I really wanted the book. We worked out a deal: my mom came into the shop and signed a note saying I could buy “MATURE” books and that she wouldn’t hold the shop responsible for any “naughty” content that my young eyes might land upon. And all of a sudden, I was introduced to not just TMNT, but also to some way-out, wacky books, like Twisted Tales in 3-D, Martial Law, Miracleman, The Badger, Rip in Time, Laser Eraser and Pressbutton, and so on!!! Thank you, Turtles… Thank you… 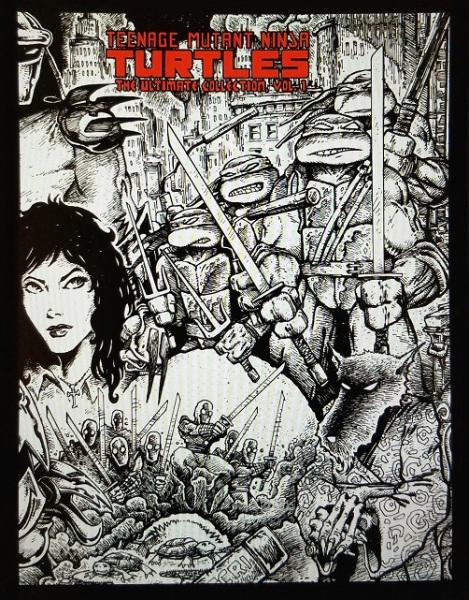 For those who either haven’t ever heard of TMNT, or who only know them from the 1990’s cartoons, the Turtles originally appeared in a series of independently produced comics, written and drawn by Kevin Eastman and Peter Laird (they shared writing and art duties), and published by their own Mirage Studios (“mirage” because it wasn’t real, just a living room in their apartment, according to Eastman in the notes to the first issue in this collection.) The book was meant to be a one-off, but caught on, and eventually became a series, then a cartoon, then a movie, then a media phenomenon that dominated the 1990s, and is still popular today! (The most recent film based on the characters came out in 2014 and made nearly 500 million dollars, worldwide, according to IMDB!)

I’m guessing that most folks have at least HEARD of Teenage Mutant Ninja Turtles, even if they don’t know about the original, more “mature” comics; however, even in the 1980s, the Turtles made a huge splash, actually kickstarting a WAVE of “funny animal” books—that rather quickly became a GLUT… Titles like Adolescent Radioactive Black Belt Hamsters, Pre-Teen Dirty-Gene Kung-Fu Kangaroos, Cold Blooded Chameleon Commandos, The Fish Police, Weasel Patrol, Hamster Vice, and so on, suddenly appeared…most just trying to cash in on the Turtle’s popularity. (Eventually, a book was released by upstart publisher, Dark Horse Comics, called Boris the Bear—in which a cute, little, teddy bear KILLS all the funny animal characters portrayed in these comics. In subsequent issues, he also kills all the robots, all the superheroes, and just about every other popular character of the day… I HOPE they someday collect all the Boris books into an omnibus or two. I’d love to read them again…)

So with all that jazz to think about, what EXACTLY, was the original TMNT comic about? To put it simply, it was a love letter from Eastman and Laird to their favorite comic books, as well as a bunch of kung-fu and science fiction films and other b-movie fare. And, consequently, the original series ended up being two guys telling some great, fun stories that will appeal to anyone who grew up with schlock sci-fi, superhero comics, and badly dubbed kung-fu films!

The first issue in this collection starts with a battle, in which these four, mutated, humanoid turtles, each with a different martial arts weapon, take on and defeat a street gang, then slip back into the sewers to report to their master, a rat, who is both human-sized AND a ninja. Next, we get an origin story, told to the Turtles by the rat, called ‘Splinter’ (based on a pint sized version of the character, Stick, who taught Marvel’s Daredevil character how to fight. There are nods to comics and sci-fi ALL OVER this series.) As part of the origin story, we learn that the true reason that Splinter has been training the Turtles in the arts of the ninja are so that they can avenge HIS master, who was murdered by the brutal mod boss, Shredder. After a bit more excitement, we get an epic battle between the Turtles and Shredder and his goons, known as The Foot Clan. (In Daredevil, the bad guys are called The Hand… Get it?)

Although this sounds like the hack plot to just about every 1970’s kung-fu film (and to be fair, IT IS,) what Eastman and Laird have going for them is their artistic skills. The layouts to their comic are fantastic. In the notes to the book, they make constant references to Jack Kirby and his big, splash-pages and fight choreography, and this love for Kirby’s dynamic style is evident in just about every panel. The lines are thick and a bit shaky, but this makes them endearing to me, (gives them that “underground” feel) but the background details are spectacular. When they draw a cityscape, it LOOKS like a cityscape, with exciting shadows and boarded up windows and individual bricks and fences with broken slats and plaster cracking on just about every wall. Their command of detail is amazing, and again in the notes for the individual panels, you learn that the guys tried to visualize actual physics for the movements and fighting scenes. The book is, if nothing else, a feast for the eyes. And, as the first issue ends with the Turtles winning the day and slinking back into the shadows, Eastman and Laird ALSO assumed that this was going to be the last we heard from their reptilian ninjas. But no…

This collection includes the first seven issues of the Mirage Studios’ books, as well as the Raphael one-shot comic (which introduces the psychotic vigilante, Casey Jones—a favorite of mine…) The books’ interiors are all black and white, which is great, allowing the creators to focus on composition and shading. The covers for the first four books are two-color and are my favorite covers. (Particularly issues #1 and #4.) With issue five, however, they had enough money to do four-color covers, which are again beautifully designed, but not quite as charming as the original issues (to me.) Also of possible interest to people who grew up with the cartoons, ALL of the Turtles wear RED bandanas in these early, four-color covers, whereas each Turtle wears a different colored of bandana in the cartoons.

After the first issue, the stories evolved, developing more of a science fiction feel, although the ninja element remains strong throughout the series. Where street thugs and gang members are the primary threats in issue one, it’s usually robots or aliens or bipedal dinosaurs that the Turtles fight from issue two on. (At least as far as this collection goes. I never owned any books beyond issue six when I was a kid…)

Wrap-up time… This collection is FANTASTIC! I loved the TMNT comics when I was a kid, and I was pleased to discover that the books are still incredibly fun three decades later. I was ALSO a bit surprised, despite the extreme reaction that the owners of Vista Comics had to my initial attempt at buying the books, how UN-offensive these stories are. YES, there is some violence, and lots of “blood,” but having the comics in black and white seriously diminishes the impact of the splatter. (It looks a lot like shadows…) I remember these books being very brutal and violent, but there isn’t really any “GORE.” There also isn’t any foul language or sexual content or blasphemy or much of ANYTHING that most folks would be offended by, aside from some well-choreographed and expertly drawn fight scenes. Oh, and the Turtles drink beer in a couple of issues. (Gasp!) On the positive side, the stories in this collection are not as CORNY as the cartoons would later become—no obsession with pizza or stupid “surfer” catch phrases, just exciting action adventure and a dry, wink-and-nod sense of humor for folks who catch the constant references to various comics and movies. I’m glad Eastman and Laird didn’t give up after that first issue, and I’m happy that two creators, who started in their living room, where eventually able to take their idiosyncratic vision and turn it into a pop culture phenomenon! Excellent work, guys! Success well deserved!