Back in February of this year (2018), I reviewed the first volume of The Defenders – Marvel Masterworks, and I have finally acquired enough dough to get volume two! And, DANG! It was fun enough that I read it TWICE before writing this review!

This is a raucous collection of brilliantly entertaining issues, spanning not just The Defenders’ own book, but also grabbing several issues of The Avengers, and a Giant-Size special, too! Steve Englehart, in the introduction, mentions that he was writing scripts for both The Avengers and The Defenders books in the early 1970s, and it seemed natural to have his two super-teams cross over, but what he ended up writing took up more than SIX ISSUES (a veritable mini-series) and has been called ever since, the Avengers/Defenders War! (Englehart says he prefers to call it a “clash,” not a war, but he’s been over-ruled by history.) One of the highlights of this massive collision is a monumental battle between Thor and The Hulk! (Why does that sound familiar?)

Speaking of sounding familiar, for any of you Marvel Cinematic Universe fans, do any of these names ring any bells??? The Hulk, Dr. Strange, Thor, Valkyrie, Hawkeye, Scarlet Witch, Vision, Captain America, Iron Man, Mantis, Black Panther, Loki, or The Dread Dormammu??? It’s SHOCKING how many of these characters, all appearing in this collection, ended up on the BIG SCREEN four and a half decades later!!! (These issues were originally published in 1973 and 1974.) In fact, the only two PRIMARY characters from this book who haven’t yet appeared in the MCU are Silver Surfer and Namor, The Sub-Mariner. So, next time you find yourself enjoying a mighty Marvel movie, thank that one guy you probably haven’t ever heard of, Steve Englehart, who wrote the adventures of most of your favorite characters in some of their best stories (probably before you were born…!)

After the Avengers/Defenders War, however, Englehart decided that writing TWO team books was too taxing, so he left The Defenders to concentrate on that OTHER team, and Len Wein took over writing duties. Wein, who was one of the creators of Swamp Thing, took the book (if this is even possible) into even WEIRDER territory. The three stories he wrote that ended up in this collection all have a hearty sci-fi flavor, with some strong horror elements thrown in for good measure.

Wein’s first story in this collection (he wrote one issue that ended up in the previous collection) chronicles the return of cosmic menace, Xemnu, whose psychic powers are used to haunting effect in a Ray Bradbury-esque “small town” story. The next tale involves Nebulon, a god-like figure who “purchases” the Earth from a shady villain and decides it would be better if the surface of the planet was completely underwater. The third story, a classic, has Magneto discovering some long-lost technology deep underground which he uses to create ALPHA, the ultimate mutant! This last tale is VERY sci-fi, and it has a guest appearance by Professor X from the X-Men. Good stuff…

If it isn’t clear from my tone, I LOVE this collection. It’s cheesy and silly and garish and absurd, but it’s exactly what a fan of 1970’s superhero comics should love. A reader looking for scientific realism probably isn’t going to be too impressed, nor are people who want Alex Ross-style perfection in their art. The art here is…well…it’s more like this: 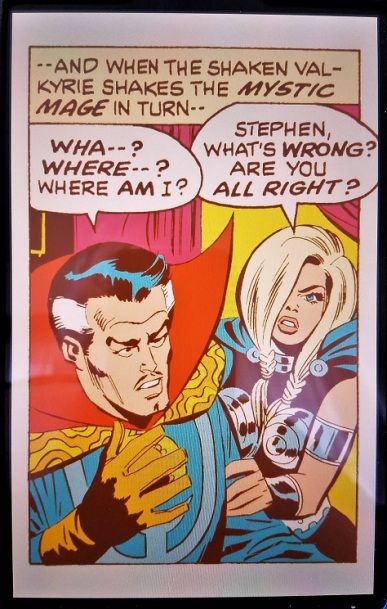 But that’s what makes this collection so fun! If you’re looking for anatomical perfection, I recommend reading a medical textbook. However, if what you’re after is monsters and magic and titanic battles and psychic adventures in multiple dimensions, then THIS collection will be exactly what you need! Someday soon I hope to get enough dough to buy the THIRD Defenders collection, and on that day, TRUE BELIEVERS, I’ll be tickled pink. (I’m not sure what that means, exactly, and now that I’m reading it on the page it seems a little yucky—but it will undoubtedly be true, nonetheless!) Until then…KEEP READING!!!