Posted on September 12, 2018 by richardfyates

My first two “Spook Show” reviews were for movies that, despite having “monstrous” content, could both be pretty easily categorized as GOOD films. They were well scripted, well shot, very well acted, and had solid, compelling stories. This time, however, I’m dipping into the “rotten” bucket and picking one of the stupidest movies that I own. Prepare yourself for Frogs. 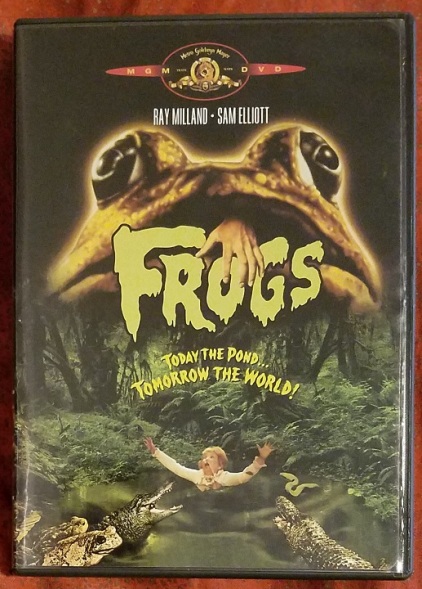 Frogs is a 1972 ecological based horror film, directed by George McCowan, and starring Ray Milland and a young Sam Elliott (in a rare non-mustachioed role!) Elliott plays a photographer, Pickett Smith, who is out capturing images of natural beauty, the wildlife—and a heck of a lot of garbage and pollution—on some body of water somewhere in Florida. As he’s paddling around taking shots of frogs and alligators and piles of trash, Smith’s canoe is swamped by a rich jerk in a speedboat, who’s out on the water drinking and testing out the new engine in his watercraft. Karen (Joan van Ark), the sister of the rich jerk, takes a shine to the soggy photographer, and she and her brother rescue Smith from the water and take him back to their private island to get him some dry clothes. Once there, he is introduced to the wheelchair-bound patriarch of the family, Jason Crockett (played by Ray Milland,) a rich, controlling fellow with a gruff personality and no love of the natural world. Grouchy Mr. Crockett has brought his adoring family to his island so they can all celebrate his birthday with him (he was born on the 4th of July), as he does every year (and we learn rather quickly that just about everyone in the family hates him, but they all want his money when he dies!) This year, however, there is a bit of a wrinkle—everyone is extremely bothered by the large number of FROGS that seem to have shown up on the island, hopping around, and making so much noise that nobody can sleep…

It’s a ridiculous premise for a film: humans pollute, so the animals (not just frogs, but also the snakes and lizards and spiders and birds…) gang together to get revenge. The rest of the movie plays like a slasher film (six years before Halloween and eight before Friday the 13th), with various members of Crockett’s family and friends and servants getting picked off, one by one, in very improbable and ridiculous ways.

One death involves a number of lizards in a greenhouse that knock over a bunch of jars of gardening chemicals creating just the right combination to cause a cloud of poisonous gas to appear and asphyxiate one poor guy. (The animals somehow know enough chemistry to KILL, and they remembered to shut the door to the greenhouse so none of the gas can escape!) And in another fun death scene, a guy is walking with a shotgun, occasionally taking pot shots at birds, when he trips and shoots himself in the leg. Laying on the ground, moaning, he suddenly finds himself being covered in spiderwebs and moss that are falling from the trees. Eventually (after a LOOOONG time lying there and moaning) the guy is so overcome by the “heavy” moss and spider silk that he can’t move (for some reason) and a few spiders fall on him—and then he’s dead…somehow. It’s a weird, agonizing, ridiculous scene, but for some reason it’s so terrible and unbelievable that I love watching it. And there are several scenes that are this nonsensical in this mess of a film…

Most of the movie consists of people walking around, talking, arguing, insulting each other, and doing other mundane things, with someone throwing a few frogs into the shot near their feet from off camera while sinister music plays. The frogs aren’t radioactive or mutated. They aren’t giant frogs (I’ve seen several bullfrogs in real life that were as big as anything in this movie), and they don’t really even seem to be doing anything but hopping. BUT THEY’RE COMPLETELY DEADLY…somehow… People keep dying anyway…

The characters in this movie are mostly unlikeable, the acting is bad, the situations are uncomfortable, the pacing is tedious, and there’s almost nothing driving the film forward between the death scenes, AND the killer creatures don’t seem to be particularly threatening or scary while they’re on screen. They’re just there…being animals. I’m honestly not sure WHY I watch this movie as often as I do. It’s nonsensical and boring! (I fell asleep during my first attempt at watching it this morning, and I had to start over after I’d had lunch and regrouped! (Ha! I’m not even joking!) So what is it about such a BAD movie that makes me enjoy it so much? I couldn’t say. Maybe I just like to torture myself???

I know part of the fun is Ray Milland, whose southern, grouchy asshole personality is kind of funny to watch. He’s so ANGRY and HATEFUL that you actual get a little bit of pleasure seeing the frogs destroy him. The other key humorous element is the ridiculousness of the death scenes. They are SO BADLY ACTED, the screams are completely unrealistic, the “attacking” creatures don’t seem even slightly interested in the humans they are supposedly trying to kill, and that very FAKENESS makes these moments completely hilarious. I don’t really get the impression that the producers were TRYING to make a funny movie (the only indication that this might be the case is at the very end when a cartoony, animated frog slurps a human hand into it’s mouth—a cartoon version of what’s on the cover of the DVD, though there are no scenes in the actual film where this happens.) I think this was supposed to be an “if we keep screwing up nature, it’s eventually going to fight back” film, but it just turned out to be a very BAD eco-conscious warning.

Still, I really should warn most folks away from this experience. Just avoid it, if you can. It’s too slow for fans of modern slasher films, and although it does have some blood in it, it’s probably not enough to make fans of Hostel or Saw happy. There aren’t REALLY any monsters in the movie, despite what it looks like you’re going to get from the cover image, and although it is suggested that the creatures did weird things like cut the phone lines or learned how to mix chemicals together or cut a rope so that the get-away boat floats away, they just seem like normal, boring critters when they’re on screen. There really isn’t anything positive that I can say about this movie; HOWEVER, if you like BAD, slow, uncomfortable, nonsensical, tedious, films with pointless, confusing death scenes and terrible acting, then FROGS is just the ticket for you!