Posted on September 29, 2018 by richardfyates

Wow… 736 pages… I am a slow reader, so when I take on a project like this, a book that I know is going to take me a while to get through, I have to mean it. I like Stephen King, I like his writing style, and I appreciate the way he takes a simple premise and expands it by setting various personalities in motion and asking, “How would X deal with this?” But, JEEBUS! It takes me a LONG time to read 736 pages—but I did it! Let’s talk about Needful Things. 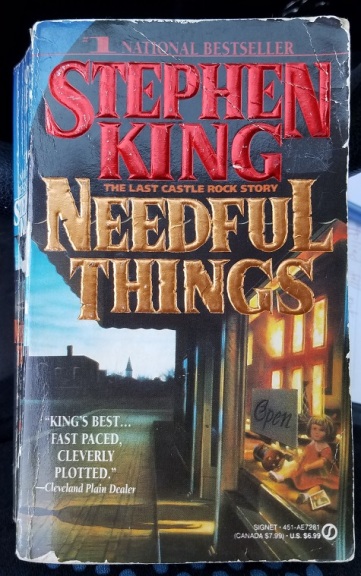 About two decades ago (I can’t remember exactly when, but probably some time in the late 1990s,) I watched this fun movie with Max von Sydow in it, where he owns this shop and he sells people what they want most in the world, but for a very steep price… I usually like movies based on King’s novels, even when the movies are garbage (I really enjoyed Maximum Overdrive, Silver Bullet, and even Graveyard Shift,) but I particularly enjoyed Needful Things (although it’s been so long since I’ve seen it, all I can remember is thinking that von Sydow was hilarious.) And, since it’s almost Halloween, it made sense to read a scary story—AND I happened to find this book for cheap at a library book sale, so… There you go. I decided to invest the time reading Needful Things.

What I LIKE about the book is the set-up. It has a very Ray Bradbury-esque sort of beginning, with this slightly idyllic little town (with some scary elements in its past,) that is approached by an outsider (Mr. Leland Gaunt) who seems to have a little bit of everything for sale in his new shop—in fact, he seems to have whatever it is that his potential customers want most in the world. Unfortunately for everyone, the PRICE for these dream items is pretty steep, not just economically steep, but emotionally troubling as well, because along with the cash, Mr. Gaunt requires that the buyer do him a little favor, play a little prank, perhaps, on someone the purchaser hardly even knows! In traditional Stephen King fashion, these little “pranks” build on each other, and eventually end up with a rather substantial body count!

Mr. Gaunt, as is made rather obvious from the very beginning of the novel, is a demonic, non-human entity—a soul collector—but he’s also just a big fan of chaos. His scenes are fascinating, as he seems to have a sly sense of humor, most of the time, and he charms most of his customers, but then he can turn in an instant, and become a monstrous creep, cruel and controlling. He also seems to have psychic powers, which plays out well in book form (in a way that film has a hard time expressing.) Regardless, Gaunt is nasty, which is just what you want in a villain…

What I DIDN’T like about the book, and this is a common issue between me and Stephen (he doesn’t mind if I call him Stephen, since we’ve been acquainted for so long), what I had some trouble with was the ending. I was much more satisfied with the ending of the film, which again might have had more to do with having the Exorcist as the bad guy rather than anything particularly great about the film script. King almost always crafts a compelling concept for his books, and they tend to move along organically and believably (considering the strange premises that he explores,) but that final, climactic MOMENT doesn’t always work for me. I’m not going to spoil the end of this book, and I’m certainly not saying that the book isn’t worth reading, because it definitely IS worth the time, but I was expecting something different from the last major scene, and it’s tough to please a reader, once they have an “expectation” in mind…

Here’s the WARNING section of this review: beyond just being a LONG book, which might put some folks off (it shouldn’t—King’s prose is easy to read and follow,) there are also a number of things that happen in the STORY that might make a great many people uncomfortable. First, there is definitely some GORY GORE in this book. King pulls no punches on describing the violence—and it’s pervasive and very, very dark. Second, the language is FOUL. There is sexist, racist, and demeaning language throughout the book, along with a more than healthy dose of CUSSIN’! The language isn’t strained—it’s foul for a reason—but it is often hurtful and shocking, and this makes sense because the characters who are using the language are TRYING to be hurtful while they are using it. Third, children are not safe. If you don’t like stories where little kids kick the bucket, avoid this book. Fourth, there is a lot of sexual content in this book. It’s not ROMANTIC or sexy, either, but nasty, sometimes disgusting sexual content. Granted, I’m a bit more prudish than some folks—Does Netflix REALLY have to have so many sex scenes in their TV shows???—but fair warning: adult content is prevalent in this book. And, the final warning I have to mention is the blasphemous content. There is some serious Catholic versus Protestant warring in this book, which digs right to the heart of these religious ideologies and may trigger folks who are sensitive to religion bashing. Of course, I would argue that King’s overarching (and underlying) theme is that EVIL IS BAD, that dealing with the DEVIL is never a good idea, and that even LITTLE SINS can have serious consequences. It’s a Christian conception that nevertheless bashes the individual, organized BRANCHES of Christianity.

So, my final opinion: I enjoyed the book and I’m glad that I read it. It isn’t really “fun,” in a traditional sense, because the subject matter turns so dark, so quickly, but seeing Mr. Gaunt plant these little seeds and then watching them grow into horrible, carnivorous, poisonous fruit is mesmerizing. King knows how to tell a tale. I also like the subtle touches in the book, like when someone accidentally brushes against Gaunt, or he pats them on the arm, and they immediately feel this horrified revulsion—until he looks them in the eye and smiles, and they instantly go back to finding him charming again! It’s a long book, but an interesting journey, worth taking, especially if you enjoy creepy, haunting stories, with lots of anger and gore and paranormal weirdness. This one’s a doozy!

P.S. – The subtitle for this novel is “The Last Castle Rock Story,” and for those of you who just watched the TV mini-series, Castle Rock, you’ll know that the subtitle to the novel isn’t exactly accurate. In fact, Alan Pangborn, who was a major character in the TV show, is the STAR of this outing. It’s funny, but as I was reading the book, I often pictured Scott Glenn—even though the Alan Pangborn in the TV show is much older than the Alan Pangborn in the book. Still, the connection is interesting…

Compulsive creator of the bizarre and absurd. (Artist, writer, poet, provocateur...)
View all posts by richardfyates →
This entry was posted in writing and tagged books, horror, humor, monsters, reading, reviews. Bookmark the permalink.