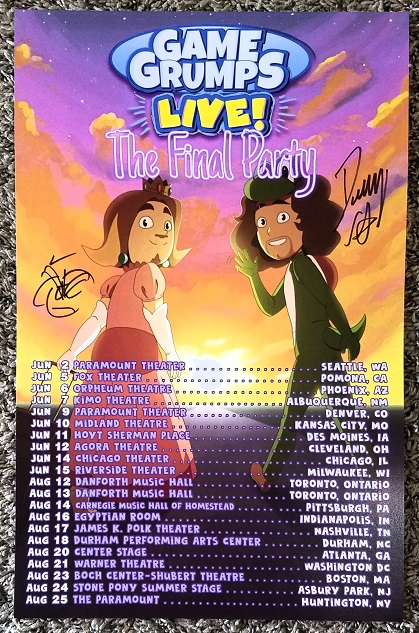 On Sunday, June 2nd, 2019, after a fun, little birthday dinner for my older daughter (Frankie) and her husband (her birthday was May 30th, his was the 31st), my younger daughter (Elise) and I split town and merged our automobile with the freeway traffic for a two-and-a-half-hour drive north to Seattle, Washington, to go see the Game Grumps LIVE!

(That opening sentence was long and clunky, but you can think of it as STAGE DIRECTIONS if you like… The THEATER OF LIFE!!! Right?)

Last August (2018), Elise and I went to Portland, Oregon, to see the famous YouTube personality, Jack Septiceye, on his “How Did We Get Here?” tour. Jack (his real name is Sean McLoughlin) put on a great show that was built around his journey from small town Irish kid, through several years of loneliness and depression, to his current level of success as a YouTube star. It was a funny, motivational show, and Ellie and I had such a good time that we decided we needed to go to more shows like that one.

Enter the Game Grumps. For those who don’t know these folks, they are Arin Hanson (voice actor, animator, and comedian) and Dan Avidan (singer, comedian), who have a popular YouTube channel on which they play video games and, in other segments like the “Ten Minute Power Hour,” they do crafts or play with old toys or board games and make goofy jokes. Hanson, Avidan, and another fellow (Ninja Brian) are also in a band together, called Starbomb, who have produced three CDs of novelty songs based primarily around video games. (In addition, Avidan and Ninja Brian [aka Brian Wecht, a retired physicist!!!] have a second, extremely popular band, called Ninja Sex Party—a group that I will eventually discuss in great detail, once we catch one of their live shows!)

For one of my Father’s Day gifts (my kids spoil me every year), Ellie got me the newest Starbomb CD, The Tryforce, SIGNED by the guys in the band, and that CD is what we listened to for the entire drive to the show. 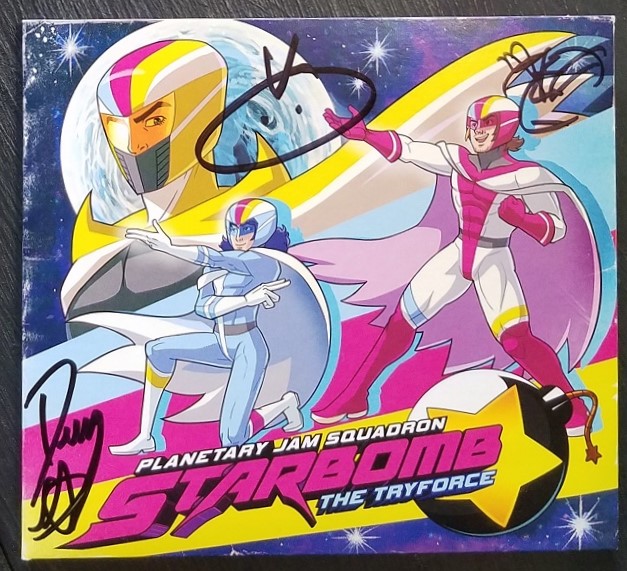 The drive—it was a Sunday evening (and not raining, which was nice)—wasn’t too bad. Traffic moved well enough (until we got to Tacoma, were traffic NEVER moves adequately), but we got to Seattle a solid twenty minutes before the doors opened, found a fairly inexpensive parking spot that was only about a block from the theater, and we found out where we were going almost instantly. Ellie, looking down the street, says, “There’s a bunch of nerds. That must be the line.” (This isn’t a direct quote, but it’s the exact MEANING of what she said.) (I remember saying something similar to my Uncle Randy, once—or he said it to me—while we were heading into a comic book convention in Portland, Oregon. One of us said, “Man! Look at all the nerds…” Then we looked at each other, then looked away and didn’t talk for a while…) 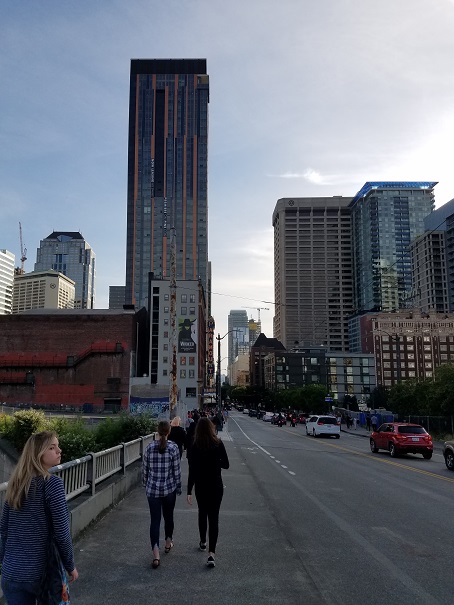 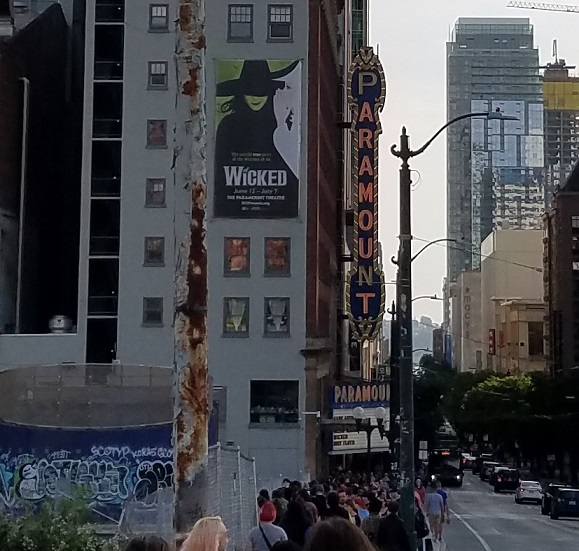 This was our first time visiting The Paramount Theater, and the place looks FANTASTIC! According to the Seattle Theater Group website, the Paramount opened in 1928 and seats about 2,800 persons. It has a classic “old Hollywood” opulence, which I really liked—although I’m not certain how interested Elvis was in the building itself. She mostly wanted to get in the merch line as quickly as possible to make sure she got a signed poster before they sold out, but the line wound around the lobby and up a huge staircase onto the second floor. We stood in the line for a while, but when we realized the show was about to start—they did the “dim the lights” sign—before we even made it down the stairs, we gave up waiting in line and went back to our seats. Ellie DID eventually get her poster, which I photographed and put at the top of this post, so don’t worry about that—and I’m sure we’ll get a frame for the poster, pretty soon, so she can hang it in her bedroom alongside the Jack Septiceye show poster she got last summer!)

[Sorry about the quality of some of these photos. I used my phone to take these, and it doesn’t do well in low-light situations!] 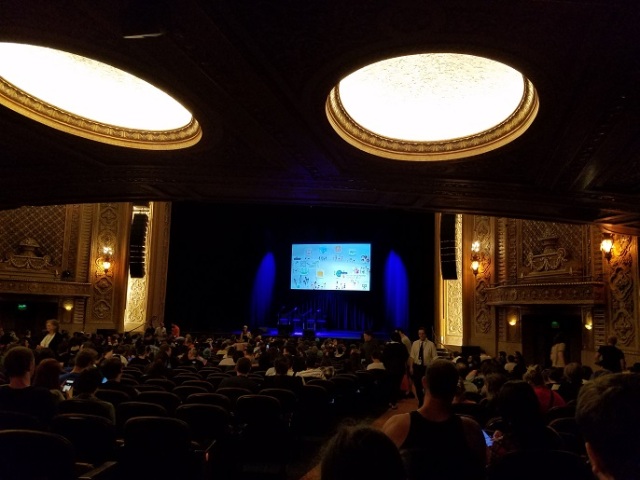 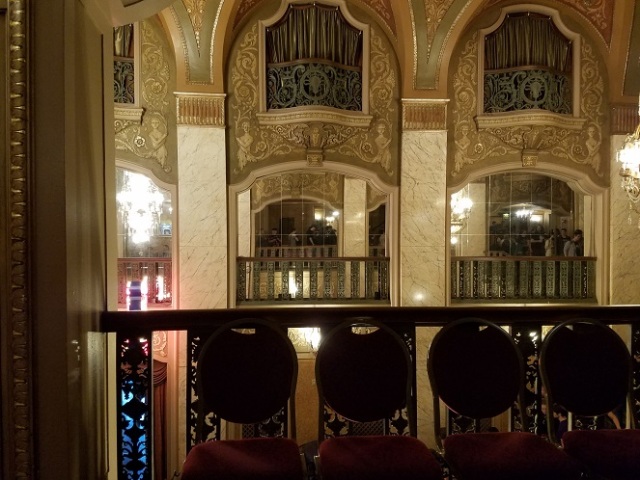 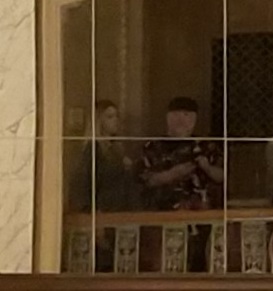 This show was quite different from that OTHER YouTuber’s show, and one of the main differences was the audience. The Jack Septiceye show had a LOT of kids at it, and I’m talking 14 or 15 years old down to maybe 8 or 10! (Despite the fact that Jack cusses like a sailor.) The Game Grumps, however, drew a much older crowd—at least at this particular show. There were a few littler kids, but I’m going to say that most of the crowd was in their twenties or older. (Despite the fact that Dan and Arin cuss like sailors… What is it with YouTuber’s and cussing???)

Another difference was in the format of the event. Instead of following a narrative, this show was MUCH looser, and a lot more like a sporting event. (SPOILERS, possibly??? If you’re planning to see the show on one of their other stops, then don’t pay too much attention to what I’m about to say for the next four paragraphs or so…)

The show started with a guy being picked out of the audience to play a game of Super Mario Brothers on the big screen over the stage…while he was wearing a blindfold…and while the audience shouted directions at the poor guy, trying to help him to jump at the right times and complete the level. This was pretty funny, and it took about ten minutes, and then the Grumps themselves came out onto the stage.

For the MAJORITY of this event, the Grumps played a four-person game of Mario Party on the big screen. Arin manned one character (Princess Peach, I believe), Dan another (Yoshi, if I’m not mistaken), and then the audience was split down the middle with one side playing Waluigi and the other playing Donkey Kong. Whenever there was a mini-game that required a player to manipulate a controller, the Grumps sent a henchman into the audience to pull a player from either side of the theater to come up on stage and represent their team. 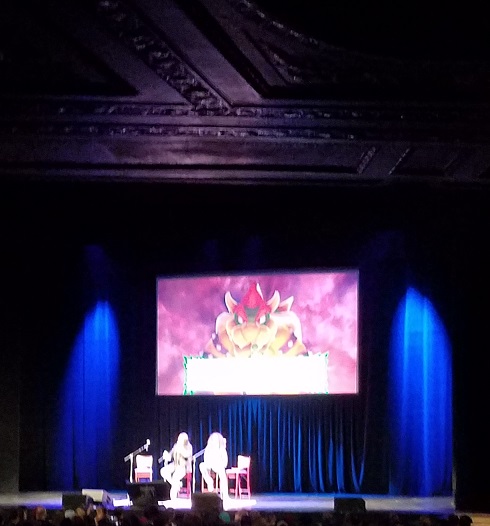 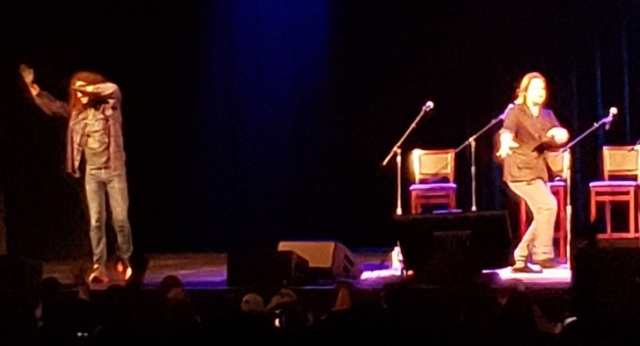 [Elise took this picture with her phone. It was slightly better than most of the images that I got, but still suffered from low light and long distance… We weren’t very close to the stage…] 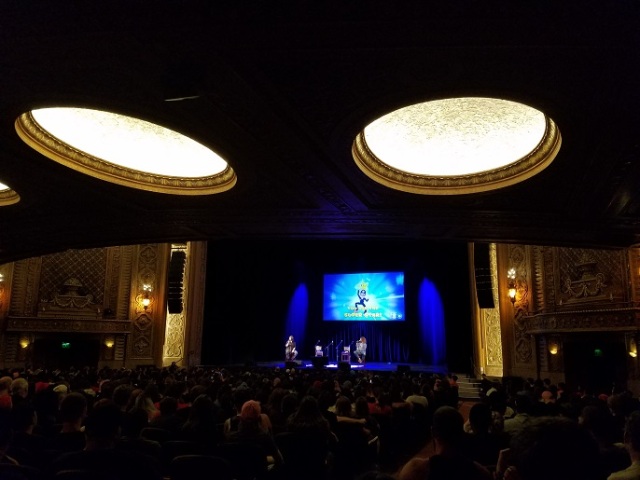 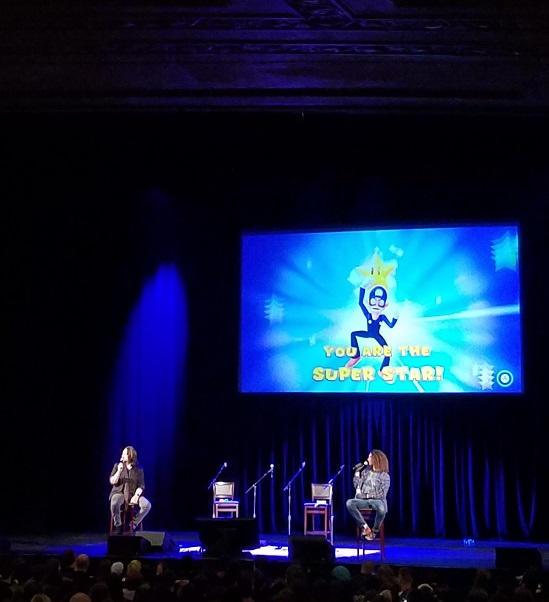 The crowd seemed to dig the whole affair, really getting into the action and screaming and cheering and such (it was a LOUD event!), and Arin and Dan made jokes and poked fun at each other as the game played on and, eventually, one team was crowned the winner. (At the Seattle show, Waluigi eventually became the Grand Champion.) After the game was over, the Grumps took some questions from the audience (and Ellie snuck out to the merch booth and bought her signed poster!), and that was it!

The show was definitely funny, and the jokes and snark that anyone who enjoys the Game Grumps’ YouTube show would expect were certainly in full effect, but I think Ellie and I were a little bit bummed that there wasn’t more of the PERSONAL element that Jack Septiceye based his show around. We both had a good time and were happy that we went, but overall, the show didn’t quite have the gravitas that we’d hoped that it might. Still, I’m definitely excited to see Ninja Sex Party next time they come through Portland—if the show doesn’t sell out again before we can get tickets. (The Tenacious D show sold out almost instantly!!!) Elise also mentioned that she would like to see Markiplier, if he comes back through the area. And we are ALSO still thinking about going to PAX West (the Penny Arcade Expo, which is all about video games), although it looks like tickets are already selling out—or “badges” are, which I think is like a ticket—and they haven’t even announced who is going to be speaking at the panels or which bands are scheduled to play… (How are we supposed to know if it’s going to be worth the entry price if we don’t know who’s going to be there to entertain us???)

All things considered, I’m very glad we went to this show. It’s always fun to do things with my kids, and Ellie and I haven’t done THAT many things with just the two of us, so that was cool. I also thought the theater looked fantastic, and I wish we’d arrived early enough that we could have explored the place a little more thoroughly before we had to take our seats. The theater was also easy to find, only a few turns off the freeway, and the parking wasn’t too bad, especially for Seattle…

Plus, BONUS ROUND, Ellie and I had a great talk on the way home—with no t.v. or movies or anything like that to distract us, we just took the opportunity to really communicate, and I’m happy that we had that chance. And that’s what I’m talking about. When you DO THINGS with your family and friends, it’s not just the event or movie or concert or beach or theme park that you’re experiencing that’s important, it’s the QUALITY TIME that you’re spending with the important people in your life. THAT’s the best part of getting out and doing stuff.

Now that you’ve read about another one of my mini-adventures, it time for YOU to go out into the real world and do something interesting—or something LITTLE that you MAKE IT INTO SOMETHING INTERESTING by investing in it. Write about it, be conscious of every element of the trip or event, however simple or mundane it might seem to other folks, and in your retelling of the tale, MAKE IT LEGENDARY!

[P.S. – It was upon returning from this trip to Seattle that my kids surprised me with the Asteroids machine for Father’s Day. (See THIS POST for the earlier details.) Apparently, after Ellie and I left town, Frankie and her husband, Alec, came back to my house with the big box that contained the machine and put it together. (Alec also helped hang a pot wrack for Mariah, which was nice!) When Ellie and I pulled back into town, she called Frank—or video chatted or some technology thing—and shared the shock on my face as I walked into the living room, which did NOT have an Asteroids machine in it when I left town…the shock on my face when I suddenly discovered that one of my most cherished childhood dreams had come true! Thanks again, Frankie, Alec, and Ellie—and Mariah for letting me keep such a big toy in the dining room!!! Yep… Definitely a lucky guy!!!]