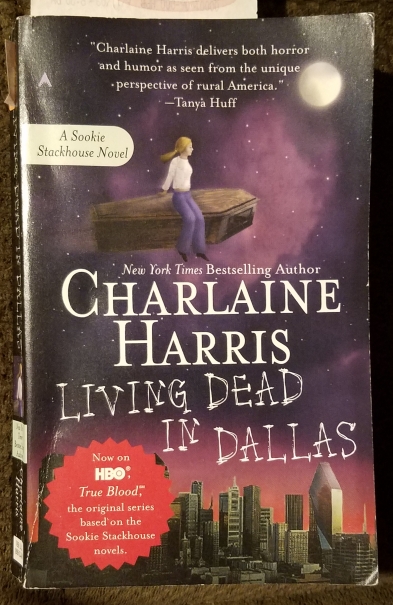 This is the 2nd book in the Sookie Stackhouse series of vampire/romance/mystery novels written by Charlaine Harris. (I reviewed the first book in the series, Dead Until Dark, a few weeks ago.) This is my third or fourth time reading this book, and I still found it entertaining. I’m a bit burned out on vampire stories at the moment, but despite this fact, the characters in this book are like old friends or family members that I can stop by and visit every once in a while.

This particular book has two (essentially unrelated) story-lines in its pages, one of which is pretty interesting, while the other is somehow brilliant and flat at the same time. In the first story-line, Sookie (the psychic waitress) is sent to Dallas by a powerful vampire, Eric, to help the Texas based undead find out what happened to one of their missing vampire buddies. (It seems silly when I write it out, but the storyline comes across well enough in the book. You need to have the ability to suspend disbelief with a series like this, but if you can go with it, the experience can be fun.) The perps who have nabbed the missing vampire are a religious group, the Fellowship of the Sun, who are planning on sacrificing the abducted vampire in a weird sunrise ritual. Because vampires are tough to kidnap, they have enlisted the help of an ancient, child-molesting vampire, Godfrey, who has come to believe that he is TOO evil and so he must destroy himself. (Again, you’ve got to suspend some disbelief…) This storyline is pretty fun and satisfying.

The second plotline involves Sookie trying to solve the mystery of who murdered Lafayette, the gay cook from the bar. Part of this second storyline involves a creature from Greek mythology, a maenad—one of the handmaiden’s of Dionysus (a true party god!)—and this character, as presented in the novel, is one of my favorites in recent history. She is crazy, chaotic, and mysterious—a force of nature, like a little, naked tsunami, covered in blood and leaving bodies in her wake—a truly frightening and entertaining character!

The storyline involving the murder of Lafayette almost seems like a throwaway, isn’t that interesting for most of the pages that are dedicated to it, and it doesn’t have any connection to the Dallas plotline at all, but because this bookend section DOES eventually let the reader spend some time with the maenad character, I’m glad it’s in the novel. Because her scenes are so fun, this otherwise flat element of the book suddenly becomes worthwhile, thanks to the few pages that are devoted to her! (The “bookend” plot structure, a storyline introduced at the beginning of the novel, which is then dropped while a second story unfolds, and then returned to once the main story is over, is pretty common throughout Harris’s Sookie books. Personally, I don’t mind it, but it might get irritating for some readers.)

As I mentioned in my review of the first novel, H.B.O. produced a television show based on the Sookie books, which they called TrueBlood (named after the brand of synthetic blood that many vampires in the series drink.) For the 2nd season of the H.B.O. show, the producers chose to change several key elements from the novel. Of these changes, two were actual improvements, and the third was a complete tragedy and infuriated me beyond measure. The first change, which ended up being extremely significant, was that Lafayette was NOT found dead in the back of a parked cop car at the beginning of the first episode, but instead lives and becomes a major character in the series—and this was a great move, in my opinion. The actor who plays Lafayette, Nelsan Ellis, was so charismatic that the producers just couldn’t bring themselves to kill him off! [Editor’s note: It grieves me to have to say it, but Ellis has died since I wrote this review. He will be missed! —RFY]

The next change was that the ancient vampire from the novel, Godfrey, (called Godric in the t.v. show,) was dramatically revised for the H.B.O. show, and again this was for the better. The child molesting Godfrey, despite his “told-not-shown” lascivious past, is actually a rather flat character. He doesn’t do much or say much in the novel or leave much of an impression. He does save Sookie from being raped in one scene, but he seems uninterested in what he’s done after doing it, and then disappears without making any real impact (beyond being a deus-ex-machina). However, the t.v. series makes some dramatic changes to Godfrey and reimagines him as the character Godric (played by Allan Hyde in the H.B.O. show), and he is a truly fascinating character. He’s played as a powerful, ancient, but young-looking nearly god-like figure who has come to a point where he is tired of life after spending thousands of years on this planet. He appears to be a brilliant, wise, and sad figure who has seen it all and done it all, but now just wants it to end. His fascinating storyline almost makes up for what I’m about to talk about next…

Unfortunately, the long and nonsensical plot involving the priestess in the t.v. show quickly becomes very tedious, and almost makes the 2nd season unwatchable. If it weren’t for the pathos injected into the show by the Godric storyline, I would probably never watch that season again. As it is, I’ll wait a few years, then give it another try.

With that said, the novel is very entertaining and a quick read. Harris strikes a solid balance between the humor, the supernatural horror, the sexy bits, and the mystery-thriller elements, and the solid storytelling should pretty easily carry most readers through to the end of the book. Again, I wouldn’t recommend this novel for fans of realism or for people who are squeamish about violence or explicit sexual situations—but if you like vampires and mystery novels and psychic waitresses, Living Dead in Dallas will be worth the short amount of time it will take most readers to get through it.