When I was 8 or 9 years old, a guy moved in across the street from us, and he had a bunch of comic books that he would sell to the neighborhood kids for 25 cents a book. (Yes, I gave up a several games of Tempest, Donkey Kong, and Frogger to buy some comic books, as hard as that may be to believe!) Once we convinced my mom that the guy wasn’t a predator, we were allowed to go peruse his collection, and I went straight to creepy things like Ghost Rider (flaming skull, leather jacket, motorbike) and The Human Fly (crazy daredevil), but one of my brothers bought a book called The Inhumans. After I finished reading my books a couple of times, I grabbed theirs and read it, too. It was really weird and dramatic, and I’m pretty sure I liked it better than The Human Fly. Anyway, flash forward about four decades—will The Inhumans still inspire my imagination??? 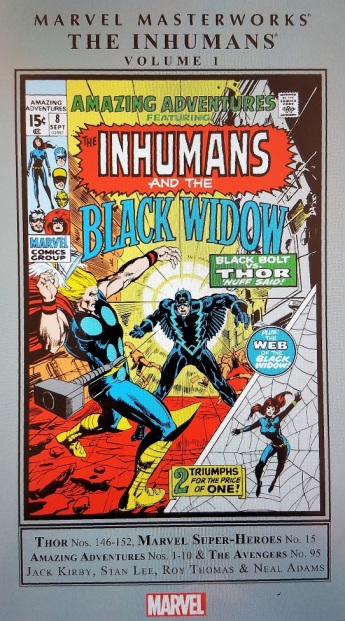 I supposed, TECHNICALLY, this post should have been called Marvel Masterworks Presents The Inhumans Volume 1, but I took some liberties. I feel like the super-beings are the important element here, not the fact that Marvel made the book. (Marvel might not agree with that, but it’s my review, so…) Anyway, I hear some of you thinking, “What the hell is an Inhuman?” Good question. They are a strange, genetically manipulated race of near humans who usually live in seclusion, occasionally interact with superheroes or alien races, and in unfortunate instances, came across normal humans who usually hate them for being different and strange. In fact, most of the stories in this book stick to the following formula: 1. Inhumans have to interact with regular folks. 2. Inhumans try to be helpful. 3. The regular humans interpret the Inhumans’ actions as an attack. 4. The Inhumans flee, wondering if they will ever be able to peacefully coexist with the judgmental regular folks. There are some twists and turns in the mix, but that’s basically how the stories in this book go.

So what do we get in this Masterworks collection? You DON’T get the first appearances of The Inhumans or of some of the key members of the group, who showed up in a few early issues of Fantastic Four, and I guess the publishers thought that anyone reading this book probably already had the Masterworks for the F.F., or something, and thus left out these early appearances. Instead, you get an origin story from the pages of Thor, a few stories from The Inhumans’ appearances in a series called Amazing Adventures, which they originally split with the character, Black Widow, (you know, played by Scarlett Johansson in the modern Marvel movies), and a story from the pages of The Avengers. There are also some fun parody stories from the weird, Mad Magazine inspired series, Not Brand Echh, which follow the adventures of The Unhumans. (To me, these weird little tales, some drawn in the style of The Peanuts or Dick Tracy or Little Orphan Annie, are the most entertaining parts of this collection.)

And who ARE The Inhumans, anyway? There are some pretty interesting characters in this wacky group. First we have Black Bolt, the god-like leader, who has so much power within himself that he can’t even speak for fear of destroying everything around him. The force of even a whisper from Black Bolt can level a city. Next we have Medusa, whose long, red hair can be used like tentacles. Then there’s Karnak, the master of martial arts, whose brain can analyze anything and find a weak point; and Gorgon, the strong man with hooves, who stamps his foot and makes buildings crumble; and Triton, the fish-scaled, water man; and of course, there’s the giant dog, Lockjaw, who can (for some reason) create portholes in space and transport his friends anywhere… The characters, as rendered by King Kirby, are blocky and wild and wonderful, with Kirby’s over-the-top expressions and weird, exaggerated postures. They’re a real treat to look at, and the faces he draws can sometimes be hilarious! 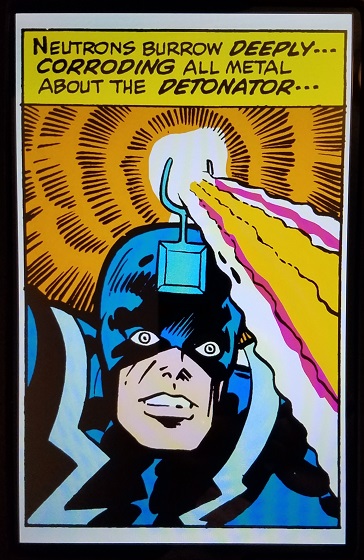 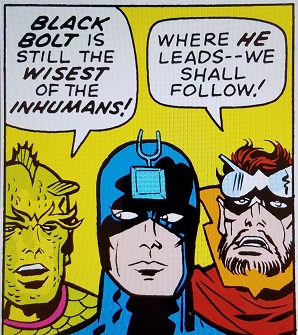 Kirby isn’t the only artist who draws these stories, but his work has a great charm.

The stories themselves are fairly simple and silly. These comics come from the late 1960s and early 1970s—a world before The Watchmen or The Sandman or Strangers in Paradise. Comic stories were less about gritty realism and more about fantasy and excitement back then, and if that’s what you’re looking for, these stories will serve. They aren’t the most mind-blowing comics I’ve ever read, but that’s probably okay. They are also relatively kid friendly, no curse words or nudity or gore, although there is definitely stylized violence. The stories also revolve around concepts like “acceptance” and not judging someone by their appearance, which seem like lessons that a lot of grown-up still need to learn today. (See our current political climate.) And one of the later stories in the book, written by Roy Thomas and penciled by Neal Adams, actually tries to engage with the plight of African Americans. (It’s a bit heavy handed, but I’m giving the creators credit for trying to bring racial issues into what WAS just superhero fantasy!)

It’s an entertaining collection, for certain, and I bought it as a digital comic for my comiXology application on my Kindle Fire HD (I don’t like advertising for any specific company, but I’m just being truthful), and I got the collection for a good price. If you watch the sales, a book like this, which is probably somewhere around 200 or 250 pages, will only cost you between five and ten bucks. Definitely worth that, in my opinion, if you’re into vintage comics. I am. They remind me of being 8 or 9 years old again, and being fascinated by the imaginative possibilities of words mixed with pictures! If you’re in the mood for some cheesy fun, this might be the book for you.