My wife was listening to a Bill Maher video clip this afternoon in which he was talking about the current U.S. political horrors, and part of what he was complaining about was that people in this country don’t read books anymore. I was listening, as well, and I thought, “And that’s why I started my Read a Damn Book project! To help suggest books for people to read.” Then Maher said that people who do read only bother with what he implied were worthless kids’ books, like Harry Potter and Twilight. I can’t speak for Twilight because I’ve never read it, but the Harry Potter books are some of my favorite novels. By a freak coincidence, I had just finished rereading Harry Potter and the Sorcerer’s Stone LAST NIGHT, and if you’ll follow me on, I’ll tell you why Bill Maher was wrong for suggesting that Rowling’s books are not worth reading. 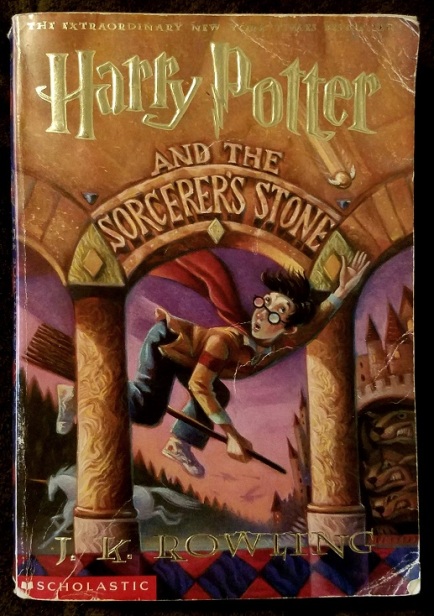 When my older daughter, Frankie, was still in middle school, she wasn’t much of a reader. We’d found a couple of things that she liked, some Cardcaptor Sakura novelizations, a few Pokemon comic books, but nothing really GRABBED her—until Harry Potter. Sometime shortly after we watched the first film, Frankie discovered the books. We bought her the ones that were already out, and she read them quickly. When each new book was released, we’d go to the midnight releases. Eventually, my wife read the books, then I did, then my brother, Dave, started reading them—just about the whole family…

And WHY did we all read them? What was so addictive about some silly kids’ books about wizards and witches? At first, I think my wife and I read them to be supportive of Frankie’s interest, but eventually, we decided that we genuinely LIKED them. To put it in the most basic of terms: THESE BOOKS ARE INCREDIBLY FUN! The early stories are entertaining adventure tales with well-drawn characters, full of humor and suspense, and they take place in a wonderfully well-conceived, intricate world. Yes, these are kids’ stories, at least for the first few books (the tales mature as the characters do AND as the author finds her voice.) Maher, who may or may not have read the books, apparently doesn’t understand (or care) that one of the BEST things a book can do is transport the reader to an imaginary world where they can be excited and entertained—and Rowling’s books are SO entertaining that I’ve read this series at least three times through already, cover to cover. Remember, I’m a slow reader, so REREADING something has to be worthwhile. And let’s also consider, I’ve read Michel Foucault, Plato, Derrida, Abraham Maslow, William James, Henry James, Shakespeare, Jung, Camus, Kierkegaard, and a thousand more (literally, not figuratively)—but I ENJOY reading the Harry Potter books more than most of those.

I’m assuming a lot of you have already read Harry Potter and the Philosopher’s Stone (sorry, SORCERER’S Stone—whatever THAT’s supposed to be), and most people have seen the films, but just in case you haven’t, here’s what the first book in the series is about: Harry, a young orphan, lives with his aunt and uncle and cousin, who treat him very poorly and blame him for the weird things that seem to happen whenever Harry gets angry or frightened. Eventually, Harry finds out that he is a wizard, as were his mom and dad, and he gets invited to attend a school for witchcraft and wizardry. Along the way, Harry discovers that there is an entire, hidden world of magic, myth, and supernatural goings-on, which has existed in the shadows of London (and other similar places) for centuries.

As I mentioned above, the characters in this series are quite entertaining. Harry, Ron, Hermione, Hagrid, Dumbledore, Snape, Neville, the Weasley twins—each of these characters have individual motives, clearly conceived personalities, and over the course of the series, they grow and change, some folks rather dramatically! In this first book, Harry, Ron, and Hagrid are the primary characters, with Hermione being more of an adversary for most of the novel than a friend, Norbert the dragon is in the tale for MUCH longer than he was in the film version, and Professor Dumbledore only actually shows up in a handful of scenes in the book—but he easily steals the show when he is involved. In fact, in this book he comes across as almost crazy, spouting gibberish and nonsense poetry or wearing a floral Christmas bonnet in a holiday scene, which was also cut from the movie.

Honestly, if you’ve seen the film, but never read the novel, you really are missing out on quite a bit, both in level of detail AND in Rowling’s prose style. She has an easy to read line and a subtle wit, which does show up, a bit, in the films, but can be felt in full force in her writing. For instance, the novel begins not with Harry or with any wizards or witches, but with several rather humorous pages devoted to the Dursley’s. Vernon Dursley, a mid-level exec at a company that manufactures drill bits, lives a very NORMAL life, and he’s very proud of just how normal and boring his life is. However, on his way to work, one fateful day, he starts seeing strange things in the streets—people in weird clothes gathered on corners and cats that seem to be reading maps, and he overhears snatches of odd conversation while grabbing a bite of lunch, and all of these things bother him to no end. It’s a great sequence, which leads the reader, quite easily, from Dursley’s boring, “NORMAL” world, into the exciting and mysterious world of magic.

In fact, this book is only a little over 300 pages, and a solid THIRD of the tale elapses before Harry even makes it to the doors of Hogwarts (on page 112.) In addition, Harry and Ron are much scrappier in the text, getting into more than one fist-fight and rarely taking any guff from their Slytherin nemeses. Another element in this book that was removed from the films is Peeves, the poltergeist, who appears in several key scenes in the novel, adding both humor and a bit of suspense. (I’m still not sure why they chose to take Peeves out of the films. I can imagine kids would have loved him!) Don’t get me wrong, I found the movies to be very enjoyable. We’ve watched them dozens of times each. However, the books are more detailed, and they include a great many scenes and elements that didn’t make it to the big screen.

So there you go. Harry Potter and the Sorcerer’s Stone is the entry point to a very fun, very well realized world of adventure. It’s a quick read—even at my incredibly slow reading speed, it only took three days to finish it, and it’s an easy enough book that even middle schoolers can pick it up and enjoy it. Some of the later books get a bit more dark, and this one does mention a few murders in it, but it never gets particularly graphic. If you’ve never read a Harry Potter book, this is the place to start. If you HAVE read them, but it’s been a few years since your last visit, I recommend going back every once in a while. It’s been at least two years since I last read the series (maybe three?), and I’m glad I decided to give it another go! I don’t care what Bill Maher, or ANYBODY says, if you’re reading something and you enjoy it, it IS worthwhile!

1 Response to “Read a Damn Book – 083: Harry Potter and the Sorcerer’s Stone”