When I’m down and just not feeling SUPER, there are a few things that I can do to pick myself up: listen to Adam & The Ants; watch an old 80’s comedy, like Ghostbusters or Top Secret; or I can read one of Rumiko Takahashi’s transgender martial arts romance comics! 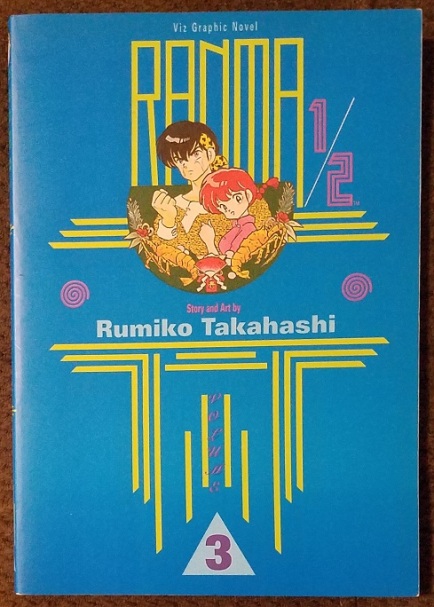 I’ve already reviewed the first and second volumes of this series, but for those who haven’t heard of it, here’s an extremely abbreviated explanation for what’s going on in the story. Ranma and Akane have been told by their fathers that they must marry. They both claim that they are not too keen on the idea of being forced to wed against their wills. To complicate things, about a million other people all want to either marry or KILL both Ranma and Akane, AND when Ranma gets splashed with cold water, he turns into a girl…

There’s a bit more to the story than that, but that’s all you really need to know for right now. Actually, what you need to know is that this book is HILARIOUS. Takahashi is a brilliant cartoonist, able to draw not only gratuitously over-the-top action and fight sequences, but she can also create some of the funniest facial expressions and scenes of ironic melodrama that I’ve ever come across in Japanese comics. (I’ve read more than a few.)

For example, in this book we are introduced to Shampoo, a Chinese Amazon warrior woman who has vowed to KILL the female version of Ranma. However, when she is bested in combat, this time not by the female Ranma but by his male form, she decides that she want to MARRY him (but still wants to kill the female version…) Here is how Takahashi visualizes this moment! 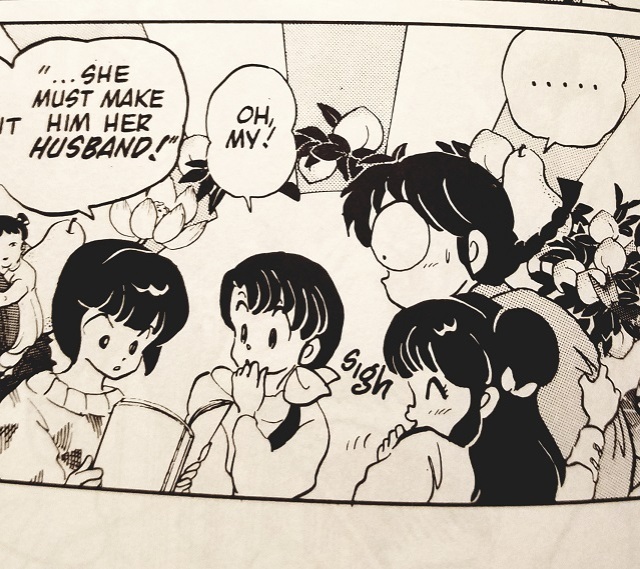 The lines creating the facial features are incredibly simple, like Charles Schulz’s work, but that gigantic eyeball!!! To me, that’s just hilarious. (Maybe you don’t think so, but I love a sight gag…) Takahashi has a simple, funny style, particularly with the faces, but she’s also a master of balance and form, so when she needs an action pose or for a punch to look like there’s real power behind it, she can produce that effect. And that’s good, considering how much of this book is devoted to people pulverizing each other. By this point in the series, there are about a dozen different romantic threads connecting various characters, and each of these threads tends to involve massive jealousy and violence. This person kisses that person, so someone gets bashed in the head. It’s an almost Three Stooges levels of slap-stick, but I’m fine with that.

Another thing that Takahashi has mastered is ABSURDISM. For instance, this book starts with a couples-martial arts-ice-skating battle at the local high school, to determine who gets to own a little black pig (who is actually Ryoga, a powerful fighter who, like Ranma, is now cursed and turns into a little black pig when he gets splashed by cold water.) After that craziness has ended, we meet Shampoo, the Amazon warrior I mentioned above, and see her deadly, shiatsu shampoo-massage attack that can distort a person’s memory! It’s wack-a-doo stuff…(and exactly what I needed to help remind me that the world is NOT always a terrible place!)

So there you go. If you’re in the mood for something funny, and you like martial arts and complete craziness, then Ranma ½ would be a great series to grab. This book is fun, but I should mention that there is a minor bit of cartoon nudity, as there always is in these books, but (as I also always mention) it’s not particularly explicit or naughty. (If you can handle the nudity in Sixteen Candles or Revenge of the Nerds, this should be a cake walk.) I love Takahashi’s art style, personally, and I find the absurdist humor to be entertaining, so for me the book is 100 percent great. If you’re NEW to Japanese comics, or even just this series, I’m not sure this is the best book to start with (considering it takes off without really explaining who anyone is), but even if you don’t know what’s going on, it’s still pretty damn funny!