Jack Kirby, one of the true geniuses of comics, created or helped to create some of the most important and fondly remembered superhero characters in the world: Captain America, Inhumans, X-Men, Fantastic Four, Avengers, Hulk, Black Panther, Nick Fury, Marvel’s Thor, and Silver Surfer, to name just a few. The guy was a master, helping to make Marvel into one of the most powerful and successful comics companies in the world, but sometime around 1970, Kirby left Marvel over creator’s rights issues and was quickly scooped up by DC. These greener pastures didn’t seem particularly green for very long, and by 1976 he’d quit DC and gone back to Marvel (for a few more years before giving up on comics almost entirely around 1978 or ’79.) For this review, we’re going to look at one of his DC books, Mister Miracle. 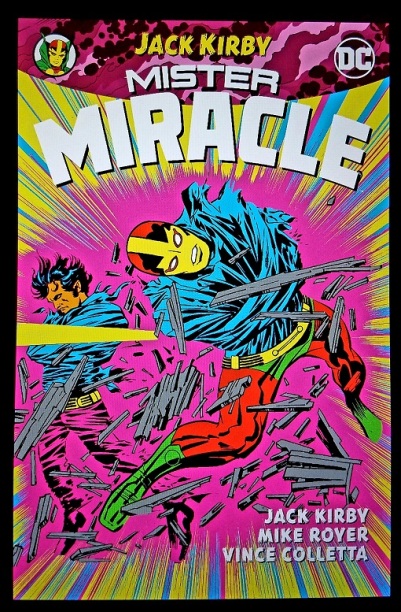 Between 1971 and 1974, Kirby released 18 issues of Miracle Man, and he wrote, penciled, and edited the series himself, with Mike Royer and Vince Colletta providing inks and Royer helping with the covers. (All 18 issues are included in the digital copy of this collection that I read.) Miracle Man was one of three new series that Kirby created for DC in which he defined an entire cosmological mythology. These stories are referred to as “The Fourth World” saga. The other titles in which this mythology was laid out were The New Gods, Forever People, and (strangely, one book that Kirby didn’t create) Superman’s Pal Jimmy Olsen. The overarching evil force of this saga was the character, Darkseid, who was probably an inspiration for Thanos. (Thanos was created by Jim Starlin for Marvel a few years after Kirby gave us Darkseid.)

Kirby’s Fourth World stories are considered “next level” material today. In the pages of these books, King Kirby created a fully formed mythological system (with good and evil forces warring throughout the galaxy.) To me, these stories come off as somehow really goofy and incredibly inspirational at the same time. For instance, the ultimate evil, Darkseid, who only appears in two issues of Mister Miracle, is treated as an almost godlike villain, but in the pages of this book, the nastiest and most horrible thing that Darkseid does is disrupt a wedding! (People WORKING for him slaughter others left and right, but Darkseid himself is kind of a dud. To be fair, I have only read Mister Miracle, so far, and a few issues of New Gods when I was a teenager. I can’t recall reading any of Jimmy Olsen or Forever People, so maybe the truly epic stuff appeared in those other tales. Regardless, the Fourth World books left a serious mark on the comic industry—even if they flopped in a commercial sense.

So what is this Mister Miracle book actually about? (It’s kind of a weird premise, so hold on tight.) Essentially, the concept for the book centers around the character, Scott Free, who was raised on the planet Apokolips, which is controlled by Darkseid. Scott was institutionalized as a child in an orphanage run by Granny Goodness, a tyrannical and cruel mistress, who eventually begins grooming Scott to be a member of one of Darkseid’s elite, aerial fighting battalions. However, Scott is helped to escape from Granny Goodness by a handful of renegades who are working against Darkseid, and Scott uses a “Boom Tube” (a device that pushes a user through space) to flee to Earth.

Once on Earth, Scott befriends an aging escape artist (Thaddeus Brown, aka Mister Miracle) and his diminutive but loyal assistant (Oberon.) When Thaddeus is killed by a freaky gangster, called Steel Hand, Scott decides to take over the Mister Miracle persona, with Oberon’s help, and become an escape artist himself. Of course, Scott has advanced technology, which he calls his “Mother Box,” as well as his superhuman speed and reflexes from his advanced battle training that help him pull off his escapes in ways that normal humans couldn’t. There is one really odd thing about this comic: although Mister Miracle is billed as an escape artist, and he is constantly working on his “act” throughout all 18 issues, he never actually PERFORMS as an escape artist in front of a paying crowd, as far as the reader ever sees!

In fact, the majority of this collection revolves around various kooky characters, many of them sent from Apokolips, who try to murder Scott by luring him into a trap or tying him to various doomsday devices, from which he inevitably escapes. And when I say kooky characters, I MEAN kooky. We get weird folks like the aforementioned Granny Goodness (a demented warrior grandma), Funky Flashman (the sleazy shyster who “manages” Mister Miracle’s “act” for a bit); Virman Vundabar (the alien from another planet who has the look and aesthetic of a Prussian military commander); Lashina (who attacks people with deadly straps); Stompa (who attacks people by stomping her feet really hard); and Doctor Bedlam (who doesn’t have a physical body anymore, but controls a group of robots and can inhabit any of these robot bodies at will.)

Despite the sometimes-silly names and goofiness, the stories are always very fun—if perhaps a bit predictable. (Will he be able to escape the deathtrap THIS time??? Yes. Yes, he will.) Kirby’s art style is very action oriented, though, and the energy and DRAMA that he manages to infuse his books with is on remarkable display here. Whether facing an Earth-born threat or another odd attacker from Apokolips, Scott Free’s adventures are a ball to read. The book is over 400 pages long, and I never got bored. There’s always some new side character or twist or dramatic incident to chew on, and for someone like me who love’s Kirby’s work, this book really sings!

There are a couple of ways, however, in which the series has dated a bit. The first is the language surrounding the character Oberon, who is usually referred to (both by characters in the story and in the narration written by Kirby) as the “dwarf.” He is a fully realized character, with great emotional range and an important part to play in the book, but the language used around him will likely come across as insensitive by modern standards. Another major character in the story is Big Barda, Scott’s primary love interest. Barda is an elite warrior from Apokolips who was one of the figures that helped Scott escape to Earth, and she is as strong as an Amazon—easily the toughest character in the book. (Kirby wrote several strong female characters, if you ask me.) However, the treatment of Barda by many of the male characters in the book is decidedly sexist. Part of this might have been Kirby pointing out sexist behavior, but she also appears in the book in an outfit that is basically just a bikini in a number of scenes. (There isn’t any nudity, strictly speaking, but any younger male readers would definitely have found more than a few titillating panels with Barda in them.) Compared to some of the books I’ve reviewed for the RADB project, though, this one is pretty tame, and it’s closer to P.C. than many modern works.

Overall, I loved this book. It’s silly, at times, but Kirby also manages to create some real suspense in some of the tales. In addition, the COSMIC elements, as in many of the flashback scenes that show how Scott’s life was on Apokolips, give us an intriguing look at a totalitarian dictatorship run by an insidious overlord. Those rebels who choose to stand against him often end up dead, and the occasional shift into this dystopian science-fiction world gives some fascinating texture to the story. Kirby was a master, as I mentioned above, and with Miracle Man (where he is writing, drawing, and editing the book himself) it’s easy to see how much talent the man had as both an artist and a story teller. Last, this book DEFINITELY makes me hungry to read some of Kirby’s other Fourth World stories (like New Gods and Forever People.) I’m even considering buying Kirby’s non-Fourth World title, The Demon, just on the strength of his storytelling skills. I still have The Eternals collection to read (one of the books Kirby did when he returned to Marvel in the late ‘70s) but I might save that one for a while. I don’t want to read all of my awesome stuff at once!