Posted on September 21, 2018 by richardfyates

I’m not a big fan of zombie movies. As a little kid, I saw Night of the Living Dead, Children Shouldn’t Play with Dead Things, Dawn of the Dead, Evil Dead, Return of the Living Dead, and On Golden Pond, and after watching the terrifying and disgusting things that happen in these films, reanimated corpse stories just seemed sort of DONE for me. What else could anyone possible do with ZOMBIES to make them interesting again? Leave it to a couple of British blokes to breathe new life (or new DEATH?) into a tired genre… 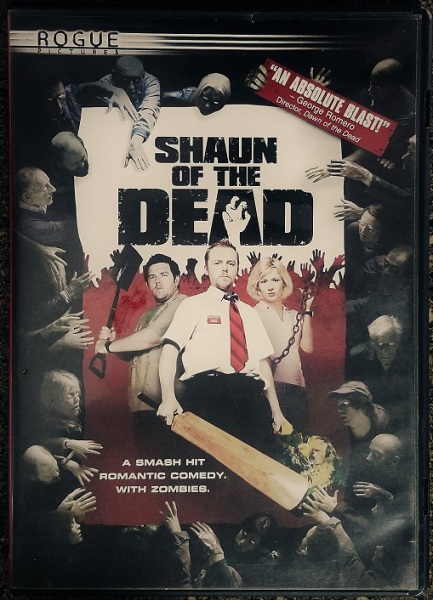 Shaun of the Dead is a 2004 horror / comedy directed by the brilliant Edgar Wright and based on an original script written by Wright and his buddy, Simon Pegg. The film stars Pegg as the titular character, Shaun, whose life (playing video games, shambling to the store for a can of soda, wasting his days at an electronics store, and going to the same pub every evening) has become so boring and repetitive (and zombie-like) that his girlfriend, Liz (played by Kate Ashfield), decides she’s had enough and gives him the old heave-ho! Meanwhile, his best friend, Ed (played by the irrepressible Nick Frost), who has been couch surfing at Shaun’s flat for far too long and who Shaun is constantly defending, seems perfectly content to smoke pot, play games, and make fart jokes all day, every day. (It’s the classic conflict: FRIEND VS LOVER—which one do you need to make most happy?)

As Shaun is dealing with the mess that is his life, (a rather tedious, repetitive mess, but still,) in the background all around him, a global epidemic has begun to spread—people are getting sick, folks are biting other folks, dead bodies are getting up and walking around, while Shaun (who is completely oblivious) wallows in his own misery. When he and Ed are finally confronted with the reality of the situation, that the DEAD have returned to feast on the living, Shaun makes a startling realization: he can use the APOCALYPSE to win his girlfriend back!

Edgar Wright is a fantastic director, and the craftsmanship on this film is evident from the opening scene on. The soundtrack is exceptional, the pacing and timing of the dialog are needle-sharp, the social critique implicit throughout the film is devastating, and the whole damn thing is both laugh out loud funny and genuinely gory and horrific. There are NO punches pulled in the death scenes—even for prominent characters who you wouldn’t expect were going to get bumped off! Make no mistake, this IS a horror film, but a hilariously funny horror film, which I would image is a pretty tough trick to pull off.

Two of the techniques that Wright uses, superbly, and which make the film a joy to watch over and over again, are foreshadowing and repetition. A third flat-mate, Pete, a no-nonsense fellow, is sick of having Ed laying around the place all the time and complains that Ed doesn’t pay any rent, doesn’t clean up the apartment, and is constantly forgetting to close the front door properly. A few scenes later, when the zombie invasion is in full swing, a television news anchor says that everyone should stay inside and lock their doors. Shaun and Ed look at each other, realize that Ed never shuts the door properly, and sure enough, as they turn towards the front door, a zombie comes wandering through it and into the room! (Maybe Pete was right about Ed?)

In another sequence, which combines foreshadowing and repetition, Shaun is at work talking with a young kid. The kid spots an ink stain on Shaun’s shirt and says, “You’ve got red on you,” obviously caused by a broken pen in Shaun’s pocket. Later in the film, a number of other characters also mention that he has “red” on him, even his mum, only in these cases, his shirt isn’t covered in red ink but in zombie blood! I could spend about 20 pages discussing repeated phrases, double meanings, and recurrent themes in this film, but as this is supposed to be a quickie review and not a literary analysis, I’ll go over just one more example, and then call it good.

In an early scene in the film, Shaun walks to the store. He passes a kid kicking a soccer ball around, almost gets hit by a car while crossing a busy street, gives some change to a homeless man, and then buys a snack at the shop—all seemingly in a daze, tripping over curbs and barely paying attention to his surroundings. In a slightly later scene, after we (the viewers) have become aware that a zombie apocalypse is unfolding, Shaun again walks to the store. He walks past the sidewalk where the kid was kicking the soccer ball around, and we see the ball on the ground, but no kid. He walks across the street, which now has no moving vehicles on it, as far as the eye can see. He passes the homeless man, who we can tell is a zombie, and just says that he hasn’t got any change for him today. Shaun goes into the store, slips and nearly falls in a puddle of blood on the floor, opens a refrigerator door with bloody hand prints all over it, drops some cash on the counter and says (to nobody in particular) that he’s a little short and will have to pay the extra bit the next time he comes into the shop, and then he leaves—all without noticing that a horde of slow moving zombies have begun shambling towards him as he walks home. It’s a perfect scene that manages to be both very funny (in a tense kind of way) and super creepy. If we remember how alive the neighborhood was from his earlier trip to the shop, the quiet and lack of movement as he starts this second walk can be extremely unsettling, even before we spot the first zombie.

So for folks looking for a genuinely funny horror film, I definitely recommend Shaun of the Dead. It’s well written, has some great music in the soundtrack, manages to be scary and funny and sometimes a little sad, all at the same time, and (once things start going bad) it doesn’t skimp on the blood and violence. It’s definitely not a kids’ film. The language is explicit, the blood flows freely, and for those looking for a sharp critique of societal values and expectations, there are a lot of deep concepts to be found hovering around the subtext of the plot. (One of my favorite moments in the movie takes place in the electronics store when a young kid accuses Shaun of being old, and Shaun says he’s not going to be stuck working in that store forever—he’s going to DO something with his life—and the kid, deadpan, just says, “When?” It’s kind of a sad moment, but there might be just a tiny bit of HOPE in that question as well. How about doing something with your life RIGHT NOW?) Anyway, it’s a great film. One of my favorites! (But I still don’t really like zombie movies…)