In light of our current political atmosphere, I thought it would be a good idea to look at a good, old fashioned, nuclear hero… I give you: DOCTOR SOLAR, MAN OF THE ATOM!!! 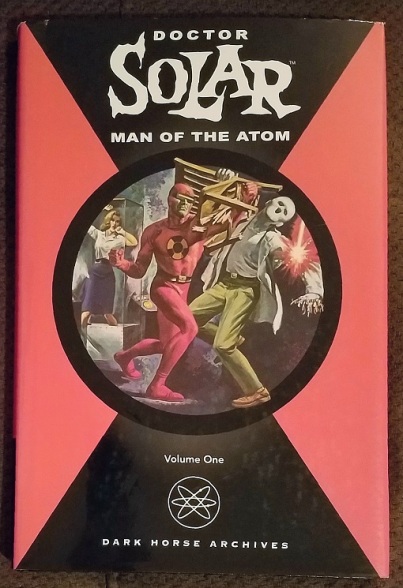 At a recent comic show, I happened across a booth selling hardcover collections for cheap, and I instantly grabbed this book. It was a 2004 release, published by Dark Horse Comics, that reprints the first seven issues of the original Gold Key Comic series, which ran from 1962 to 1964. There is a cool introduction to the book explaining some of the politics of comic publishing in the early 1960s (there were lots of rules back then), which I found pretty interesting. I’m old enough to remember Dell Comics and Gold Key and some of the other NON-Marvel or DC companies whose books you used to be able to find for cheap all over the place, at garage sales, books stores, thrift shops—until everything OLD became expensive. Honestly, I’m lucky that I found this collection for so cheap, considering it had an original sticker price of FIFTY BUCKS! Anyway, enough back story, let’s get to the ACTION!

Doctor Solar is about a nuclear scientist who is working on a project trying to turn energy into matter. It’s a weird idea, and they never explain exactly what it is they’re trying to do, but let’s just say SCIENCE, and let it go. Because SCIENCE, bad guys are trying to find out how the project is progressing, and an agent of the bad guys infiltrates the lab and tries to sabotage the goings-on and murder one of the scientists, so he can take his place. A “nuclear stack” is tampered with, and one scientist dies trying to fix it, while another, our hero Dr. Solar, takes a more-than-lethal does of radiation, but DOESN’T die! Instead, his genetic makeup is altered, giving him the power to control himself down to the atomic structure—but unfortunately, he is now RADIOACTIVE and dangerous for normal humans to be around! (This, of course, puts a serious damper on his budding love affair with Dr. Blonde-Lady…I mean, Dr. Gail Sanders.)

The series is pure pulp adventure, mixing science-fantasy, spy-thriller espionage, and super-heroics, and it’s played almost entirely straight, which gives it a fantastic kitschy-camp factor, and the stories (two short “episodes” per issue) are near-perfect pulp nonsense. Paul S. Newman, one of the co-creators of Doctor Solar, is the sole script writer, and he does a great job of creating a weird tension in his hero, who has almost god-like power, but only for a few minutes. As soon as he expends all his nuclear power, Solar falls into a swoon, and will expire if a ready source of nuclear energy can’t be quickly found (which can take the form of a radioactive cloud or nuclear waste or “cobalt pills” or a nice glass of “radioactive isotope” administered by Dr. Clarkson, one of the few people who know Dr. Solar’s secret.) It’s pretty dang thrilling, even if it’s also pretty nonsensical. (BECAUSE it’s nonsensical?)

The artwork is also quick good. The covers are painted, either by Richard Powers or George Wilson, who were both brilliant pulp and science fiction cover artists. And the interior artwork is also excellent. There are two artists who draw the issues that are reprinted in this book. Bob Fujitani: 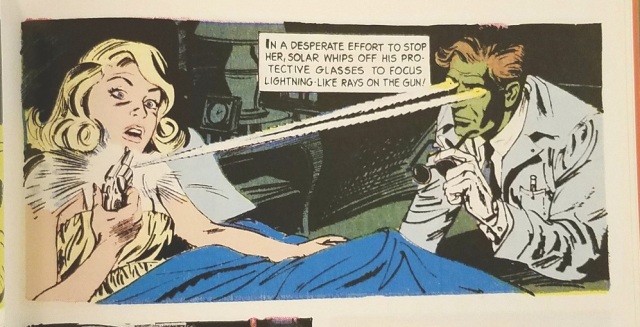 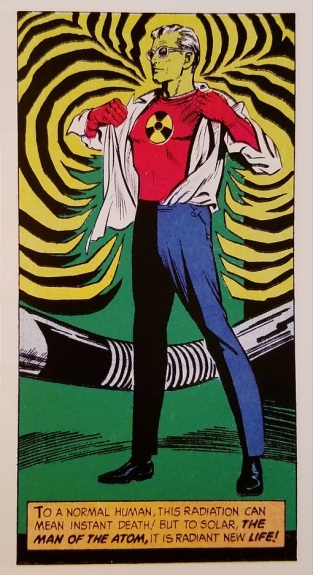 Interestingly, the very nature of the story being fantastical science, the artists almost seemed to have struck a psychedelic art style that is a future-echo of what would become popular in the counter-culture in the late 1960s and early 70s! (Remember, these stories were published between 1962 and 1964!)

Overall, the book is fun, if you like weird, pseudo-science with a healthy dose of spy-thriller and thwarted romance thrown in for flavor. The book is a very quick read (I made it through all 200 plus pages in a day), and the artwork is a real treat for people who appreciate that vintage, PULP look. This edition of the book (in hardcover) appears to be out of print and pretty spendy, but it looks like a paperback version is available online for a reasonable price. (UNLIKE Magnus, Robot Fighter, which is my FAVORITE Gold Key series—I had a few issues that I found at a thrift shop a couple of decades ago—which doesn’t seem to be available anywhere for less than a HUNDRED BUCKS, even in collected form! If you are a publisher interested in reprinting classics PLEASE REPRINT MAGNUS, ROBOT FIGHTER!!!! Russ Manning’s artwork was brilliant, and the whole mood of the series just made me feel good!)

One weird bit, the version of Doctor Solar that I have has a misprint, where two pages are reverse in order—meaning Dr. Clarkson finds an incapacitated Dr. Solar BEFORE he passes out, then, on the next page, Solar is crawling valiantly, looking for some nuclear waste or radioactive cloud to bathe in until he passes out… It’s like a mini-nonsensical-flashback. But, you know what, compared to some of the SCIENCE in this book, a little out of sequence plot-hole is actually a lot less difficult to take! Anyway, I wish there were more comics that had this great, classic, pulp feel again. The mood, the PLASTIC quality of the characters, the overblown emotional content—it’s perfect entertainment. If you want to see what classic comics were like, give Doctor Solar, Man of the Atom a try!